US President Joe Biden is cancelling billions of dollars of federal student loans. But what difference will it make?

On Wednesday, Mr Biden announced he will cancel up to $10,000 (£8,500) in federal student loans – used to fund higher education costs such as tuition and housing – for millions of Americans who earn less than $125,000 each year.

Mr Biden will also forgive $20,000 of debt for students on Pell Grants, which applies to those in greatest financial need.

The news, political analysts have suggested, was announced to drum up support ahead of the November midterm elections, and increase young voter turnout. More than half of Americans who have student debt are under 35, an age group that Mr Biden is keen to win over.

Ben Tulchin, a Democratic pollster who has worked on campaigns for Bernie Sanders, said recent action on abortion, climate change, and now student loans, have helped build the president’s profile with Millennials and Gen Z.

“So I think it’s very helpful to kind of boost turnout among young voters and typically when younger voter turnout is higher, Democrats do better,” he said.

But the student loan plan, which will cost an estimated $300bn, is not without its detractors – on both sides of the aisle – who say it doesn’t get help to those who need it most.

How did we get here?

Higher education has long been viewed as a path towards lucrative earnings, but the ballooning cost of tuition and rise in student debt has left some wondering if it’s worth the cost.

Meanwhile, wages have stagnated and tuition has increased, which means it’s harder for young people to pay it off.

Marshall Steinbum, who teaches economics at the University of Utah and studies student borrowing, said this debt mountain is proof that the current business model for education is broken.

“[The] mantra is ‘a college degree pays off, because it causes you to have higher earnings in the labour market,'” he said. “If that were true, we shouldn’t have such a student debt problem.”

How much money do Americans owe?

About 43 million Americans owe money on their student loans. That means that about one in six American adults, or about a third of Americans with at least some post-secondary education, has some student debt.

While that may not seem like an insurmountable debt load, the majority of the debt is concentrated among relatively few people. Over half the total debt load is held by just 16% of debtors, with debts over $60,000.

How will this affect the economy?

Student debt is currently the second-largest type of household debt, after mortgage loans, accounting for about 10% of total household debt. On average, people spend about $222 every month on student loan payments, according to the Federal Reserve.

The problem with debt, in the big picture, is that it reduces the amount of money that people can spend on goods and services, which in turn, reduces the country’s overall economy. The other problem with debt is that it can ruin a person’s credit score, which means their future ability to borrow and spend money might be hampered as well.

Before the pandemic, approximately 3% of federal student loan holders were behind in their payments. Loan repayments have been paused since spring 2020, and as part of his debt relief plan, Mr Biden said he will extend this moratorium until the end of the year.

Perhaps one of the most significant parts of Mr Biden’s plan is his intention to cap undergraduate loan repayment at 5% of a person’s discretionary income. The White House estimated that this will cut many loan payments in half.

Mr Steinbum said this is essentially another form of loan forgiveness, since under the new plan, interest payments that exceed this repayment cap won’t be added to their future debt load. This will especially cover people who hold large amounts of debt. 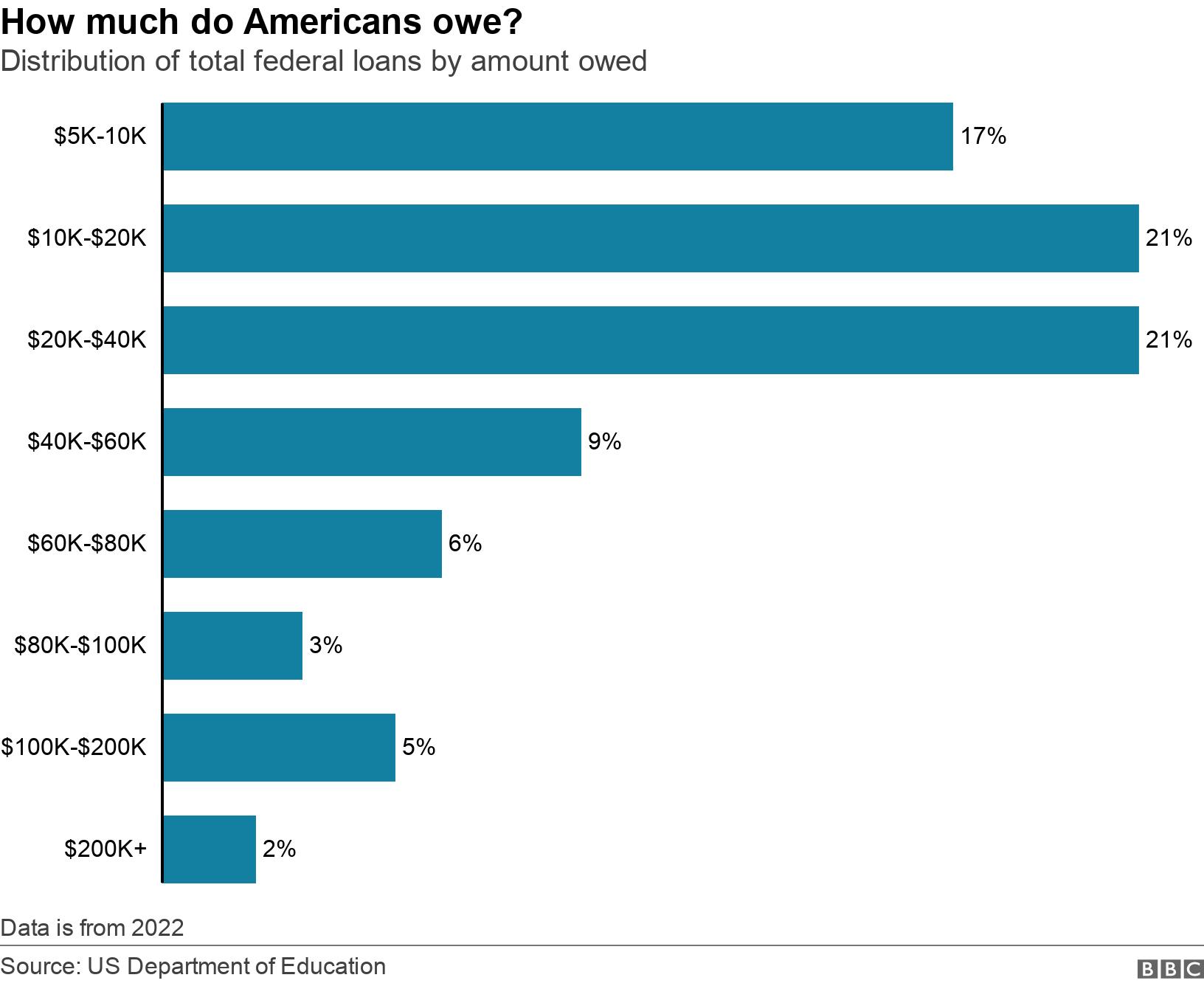 While student debt forgiveness is likely to make a big impact on people’s monthly budgets, and increase spending, it could have knock-on effects on inflation when it is already at an all-time high by giving people more buying power, and thus allowing prices to rise even more.

Most economists say the effects would be modest, since debt relief would increase people’s monthly incomes by only a few hundred dollars on average.

But former Treasury Secretary Larry Summers warned that debt relief, in addition to possibly raising inflation, could also make it easier for schools to raise tuition.

“Student loan debt relief is spending that raises demand and increases inflation. It consumes resources that could be better used helping those who did not, for whatever reason, have the chance to attend college,” he tweeted. “It will also tend to be inflationary by raising tuitions.”

So who will Biden’s plan help?

Analysing student debt and inequality is complicated, but it’s clear that debt is not shared equally across different socio-economic groups.

Four years after earning a bachelor’s degree, black graduates have nearly $25,000 more student loan debt than their white peers, according to a Brookings Institution study.

That is partly due to the fact that they borrow more, on average, than white students, but also because black graduates with a bachelor’s degree or higher earn an average of about $5,000 less than white graduates, according to the National Centre for Education Statistics.

In a statement issued before the president’s announcement, Wisdom Cole, the college and youth director for the National Association for the Advancement of Colored People, said that $10,000 debt forgiveness was “not enough”.

Other critics have attacked Mr Biden’s plan, saying it gives money to “elites”. People who do not have a post-secondary education – and thus do not hold student debt – are likely to come from a poorer family than their debt-ridden counterparts.

The University of Pennsylvania estimated that under Biden’s plan, between 69-73% of the debt forgiven would come from households in the top 60% of the income distribution.

But Marshall Steinbum, who teaches economics at the University of Utah and studies student debt, said that those arguments fail to understand the dramatic shift in education, debt and income over the past few decades.

“It’s harder and harder to get a job with fewer educational credentials,” he said.

“That idea that student debtors are privileged, and people who don’t have student debt are underprivileged… is just not factual.”

Working-class people who, in older generations, used to forgo higher education now have to pay to get certifications in order to get a job, he said. This means that education isn’t a luxury, but a necessity, for most people.

Mr Steinbum, who supports student loan forgiveness, said he’s overall ambivalent about Mr Biden’s plan, because it fails to address the root cause of the problem, which is high tuition that is primarily shouldered by individuals.

Instead of the government funding for schools, students are asked to pick up the majority of the tab for their education. Then when they can’t pay, the government has to step in and forgive their loans.

McEnany: Trump Plans to Participate in the Next Debate