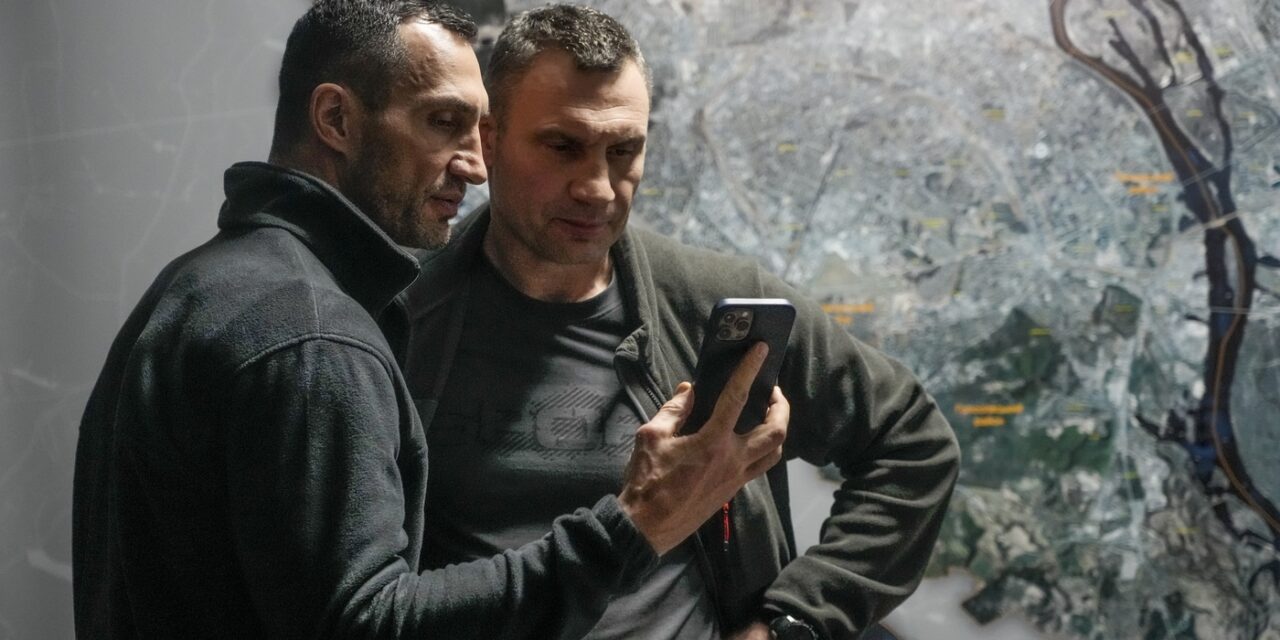 Kyiv Mayor Vitali Klitschko (right) and his brother Wladimir Klitschko check a phone at city hall on Feb. 27. When Russia invaded Ukraine, many expected Moscow to knock out the Ukrainian communications network. But Ukrainian systems, for both civilians and the military, continue to function. Ukraine, meanwhile, has regularly intercepted Russian military communications. Efrem Lukatsky/AP hide caption

Kyiv Mayor Vitali Klitschko (right) and his brother Wladimir Klitschko check a phone at city hall on Feb. 27. When Russia invaded Ukraine, many expected Moscow to knock out the Ukrainian communications network. But Ukrainian systems, for both civilians and the military, continue to function. Ukraine, meanwhile, has regularly intercepted Russian military communications.

Russia is regarded as one of the world’s most advanced countries when it comes to anything and everything related to spying, and that includes secretive, high-tech military communications.

For Russian leader Vladimir Putin, a former intelligence officer, this is a particular point of pride. Yet Russia’s reputation has taken a major blow with the often bumbling way the military has handled communications in Ukraine.

Here’s a look at how the Ukrainians have effectively countered the Russians on multiple fronts:

Q. Ukraine keeps publicly releasing what it says are intercepted Russian communications from the battlefield. Wouldn’t Ukraine want to keep this under wraps?

Ukraine feels there are huge public relations benefits in releasing intercepted material that’s either embarrassing to Russia or points to Russian wrongdoing, possibly even atrocities.

Ukraine’s military intelligence recently put out audio on social media, saying that as two Russian military members were speaking, one called for Ukrainian prisoners of war to be killed.

“Keep the most senior among them, and let the rest go forever. Let them go forever, damn it, so that no one will ever see them again, including relatives,” a voice says on the tape.

NPR can’t confirm the authenticity, and there’s no indication that the Russians acted on this statement.

But collectively, the ongoing stream of audio released by the Ukrainian government and military points to Ukraine’s sustained ability to intercept Russian military communications.

While the public releases are limited, military analysts say the Ukrainians are certainly capturing additional calls that provide important battlefield intelligence, which is not being shared publicly.

Q. How are the Ukrainians are intercepting these calls?

This is probably happening in several ways. But at the most basic level, some Russian troops have apparently been far too casual in their communications.

“We call on Ukrainians whose mobile phones were taken away by representatives of enemy troops to inform the operator as soon as possible,” the Ukrainian agency said in a statement last month.

Ukrainian civilians have complied, and this let the Ukrainian government know which phones were stolen by the Russians — and effectively became listening devices for the Ukrainians.

Dmitri Alperovitch, a cyber expert who heads the Silverado Policy Accelerator, says this is just one way the Ukrainians are tapping into Russian communications. The overall result, he said, has been a huge Ukrainian advantage in intelligence.

“The intercepted phone calls are just invaluable in getting a sense into what the Russians are thinking, the state of their morale,” said Alperovitch. “There was an intercepted phone call where the Russian officer was saying how half of his troops have frostbite on their feet, how they don’t have any hot stoves for food. They’re sleeping in trenches.”

Ukrainian President Volodymyr Zelenskyy talks with Pope Francis on a phone call from Kyiv, Ukraine, on March 22. Most Ukrainian communications networks continue to function. Also, the U.S. and other partners are helping Ukraine with intelligence that includes intercepted Russian communications. AP hide caption

Ukrainian President Volodymyr Zelenskyy talks with Pope Francis on a phone call from Kyiv, Ukraine, on March 22. Most Ukrainian communications networks continue to function. Also, the U.S. and other partners are helping Ukraine with intelligence that includes intercepted Russian communications.

Q. If this has been happening since the beginning of the war, why can’t the Russians figure out how to prevent it?

This has been a real mystery, especially since the Russians have a long history of having strong military intelligence and communications.

The Russians have a modern, secure radio system for the military. Russian intelligence has been extremely active in Ukraine for years. But Russia has so far squandered these advantages, according to military analysts.

Inexplicably, the analysts say, Russia has used basic, off-the-shelf, unencrypted radio communications in many cases that made it relatively easy for the Ukrainians and others to listen in.

Russia expected a quick and easy takeover of Ukraine, and there’s been speculation that Moscow wanted to keep the phone system, the railways, the electrical power grid and other infrastructure in place so Russian forces could use it.

And, no doubt, Russia is also tapping into Ukrainian communications and would like to continue these operations.

But whatever the reasons, Ukraine’s phone and internet systems are functioning in most places, in contrast to what was predicted before the war.

Q. Are the Ukrainians getting any outside help?

The Ukrainians are getting significant intelligence help from the United States and other NATO countries, according to U.S. officials.

Most of this assistance remains secret, but some is easily visible on social media.

“If you look at the flight radar right now, almost constantly, you see U.S. Air Force planes that are flying near the Ukrainian border, collecting intelligence,” said Dmitri Alperovitch.

The U.S. planes are not entering Ukrainian air space, but are nearby over the skies of Poland, Romania and elsewhere in the region.

“I’m sure that they’re collecting radio communications and other forms of intelligence that they then pass on to the Ukrainians that is invaluable in their prosecution of this fight,” said Alperovitch.

Q. Is this intelligence sharing new, or has this happened before?

Russia waged a major cyber attack in Ukraine in 2015, taking down parts of the electricity grid, and then Moscow interfered in the U.S. presidential election in 2016.

These Russian actions prompted the U.S. and Ukraine to work together to counter Russian cyber measures.

NSA Director Gen. Paul Nakasone doesn’t say much in public. But he testified before the Senate Intelligence Committee about U.S. cooperation with Ukraine on March 10, just a couple weeks after the war started.

“The intelligence that we’re sharing is accurate. It’s relevant and it’s actionable,” Nakasone told the committee.

“We have been equally committed to rapid and effective intelligence sharing with our Ukrainian partners throughout the fighting and for months beforehand,” Burns said.

Russian leader Vladimir Putin probably doesn’t appreciate this irony, but his cyber actions against the U.S. and Ukraine several years ago helped forge a partnership that’s now being used very aggressively to undermine his war in Ukraine. 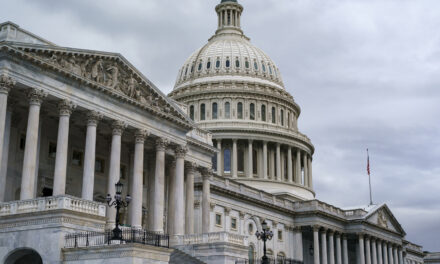 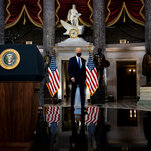 Q&A with Houston Kraft, author of ‘Deep Kindness,’ on how to be kinder