The Ukrainian military has thwarted an attempt by Russian military vehicles to cross the Irpin River on a pontoon bridge near Hostomel, a new satellite image from Maxar Technologies shows.

The bridge first appeared in satellite imagery from Maxar on Thursday, March 10, and in that photo, it appears to have been destroyed. An additional photo, published on social media on March 13, also shows the pontoon bridge destroyed, in addition to nearby Russian military vehicles.

CNN has geolocated and confirmed the authenticity of the photo posted to social media.

The pontoon bridge was located in an open field roughly five miles (eight kilometers) north of the main bridge across the Irpin River.

It’s the second known location where the Russians have built a pontoon bridge to move vehicles. Before the invasion began, Russia constructed a pontoon bridge across the Pripyat River in the greater Chernobyl exclusion zone and later moved dozens of forces across it.

Russia has asked China for military assistance in Ukraine, including drones, a senior US official said Sunday.

CNN has reached out to the Russian embassy in the US for comment but did not receive an immediate response.

“We also are watching closely to see the extent to which China actually does provide any form of support, material support or economic support, to Russia. It is a concern of ours. And we have communicated to Beijing that we will not stand by and allow any country to compensate Russia for its losses from the economic sanctions,” Sullivan said.

Sullivan said the US has made it clear to Beijing there will “absolutely be consequences” for “large-scale” efforts to give the Kremlin a workaround to US sanctions.

“We will not allow that to go forward and allow there to be a lifeline to Russia from these economic sanctions from any country anywhere in the world,” he said.

Sullivan is set to meet with his Chinese counterpart Yang Jiechi in Rome Monday.

“I’ve never heard of that. China is deeply concerned and grieved on the Ukraine situation. We sincerely hope that the situation will ease and peace will return at an early date,” Pengyu said. “The current situation in Ukraine is indeed disconcerting. Utmost efforts should be made to support Russia and Ukraine in carrying forward negotiations despite the difficult situation to produce a peaceful outcome. We support and encourage all efforts that are conducive to a peaceful settlement of the crisis. The high priority now is to prevent the tense situation from escalating or even getting out of control. There is consensus about this among the international community, including the parties concerned.”

“China calls for exercising utmost restraint and preventing a massive humanitarian crisis. China has put forward an initiative for responding to the humanitarian situation in Ukraine. China has provided Ukraine with humanitarian assistance, and will continue to do so,” Pengyu said.

The White House said last week China was “abiding by the requirements that have been put in place” over sanctions.

“Our assessment right now is that (China is) abiding by the requirements that have been put in place, but we would continue to encourage any country to think a lot about what role they want to play in history as we all look back,” White House press secretary Jen Psaki said during a Wednesday news conference.

Staff at the Chernobyl nuclear power plant (NPP) are so tired they have stopped carrying out the repair and maintenance of safety-related equipment, the International Atomic Energy Agency (IAEA) said Sunday.

In a statement, the IAEA said the Ukrainian regulator informed the agency that NPP staff were no longer carrying out repairs and maintenance, “in part due to their physical and psychological fatigue after working non-stop for nearly three weeks.” Earlier Sunday, Ukraine’s National Energy Company (NEC) Ukrenergo said it completed repair work and resumed power supply to the Chernobyl NPP.

The IAEA said the staff of 211 technical personnel and guards have still not been able to rotate from the facility since the day before Russian forces entered the site on 24 February, citing the Ukrainian regulatory authority.

“The regulator has no direct communication with the staff but receives information from off-site NPP management,” the IAEA said.

The Director General has proposed a framework that would enable the IAEA to deliver technical and other assistance for the safe and secure operation of all of Ukraine’s nuclear facilities, the statement said. Grossi discussed this last week with the Ukrainian and Russian Foreign Ministers Dmytro Kuleba and Sergei Lavrov, respectively, the statement said.

“We can’t afford to lose more time,” he said. “The IAEA stands ready to act immediately, based on our proposed framework that requires agreement from the parties of the conflict before it can be implemented. We can only provide assistance to Ukraine’s nuclear sites once it has been signed. I’m doing everything I can to make this happen very soon.”

The full IAEA statement can be read here.

Sunday is coming to a close in Ukraine as the Russian invasion is nearing its third week.

Sunday saw Russia expanding its offensive to western Ukraine, firing missiles near the city of Lviv and hitting a large military base close to the Polish border, reportedly killing dozens of people as the war draws closer to NATO’s front line.

If you’re just reading in, here are the latest headlines from the ongoing Russian invasion of Ukraine.

A tweet from Podoliak’s verified Twitter page said, “Again. Negotiations go non-stop in the format of video conferences. Working groups are constantly functioning. A large number of issues require constant attention. On Monday, March 14, a negotiating session will be held to sum up the preliminary results…”

Vereshchuk said 3,950 people were rescued in the Kyiv region and 1,600 were able to escape from the Luhansk region in the east of the country.

“The city of Mariupol was subjected to shelling and aerial bombardment all day long,” Vereshchuk said. “The humanitarian cargo remained blocked in the city of Berdyansk halfway to the occupied city.”

More than 850 people were detained in anti-war protests across 37 Russian cities on Sunday, according to OVD-Info, an independent human rights protest-monitoring group.

Russian security forces are no longer detaining just protesters, but are also trying to identify “unreliable” people among passers-by in places where anti-war protests were announced, the group says.

According to the group, the total number of people detained for disagreeing with Russian aggression since its invasion of Ukraine is approaching 15,000.

TIME released a statement Sunday on the death of American journalist Brent Renaud in Ukraine.

“We are devastated by the loss of Brent Renaud. As an award-winning filmmaker and journalist, Brent tackled the toughest stories around the world often alongside his brother Craig Renaud,” said TIME Editor in Chief and CEO Edward Felsenthal and President and COO of TIME and TIME Studios Ian Orefice in a joint statement.

The statement added, “In recent weeks, Brent was in the region working on a TIME Studios project focused on the global refugee crisis. Our hearts are with all of Brent’s loved ones. It is essential that journalists are able to safely cover this ongoing invasion and humanitarian crisis in Ukraine.”

A school in the village of Zelenogai, about 10 miles (16 kilometers) east of Mykolaiv, has been demolished by a Russian military strike, Mykolaiv regional administrator Vitali Kim said.

Video and photos from the scene, which have been geolocated and their authenticity verified, show much of the school has been reduced to rubble. Kim confirmed that a school in the Mykolaiv region was hit and posted the video and photos online.

“Some people got under the rubble and we are evacuating them,” Kim said.

Firefighters and rescue services are seen in the video.

Later on Saturday evening, Kim said that the military strike left several people either dead or in critical condition.

At 42, he would also be the youngest person to take the office in over 200 years

Opinion: What the January 6 committee’s eight hearings could accomplish 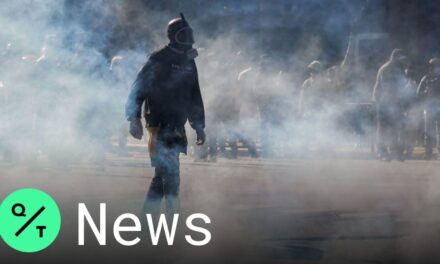