Once again, COVID means scaled-back Christmas celebrations around the world 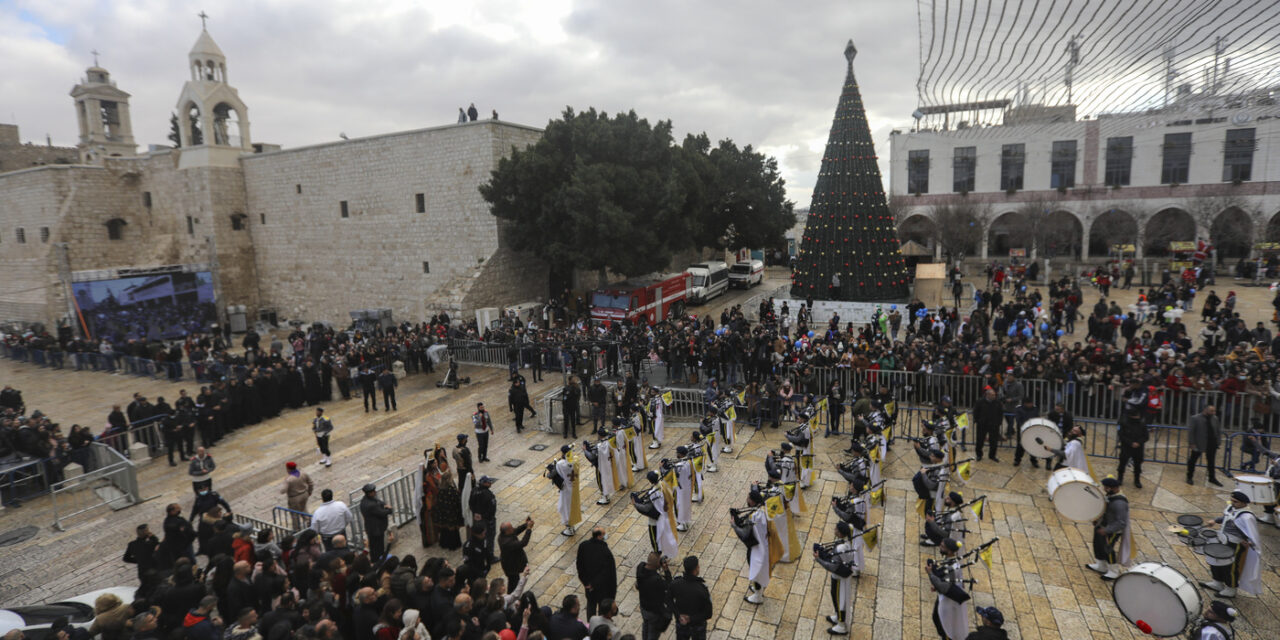 Palestinian scout bands parade through Manger Square at the Church of the Nativity, traditionally believed to be the birthplace of Jesus Christ, during Christmas celebrations, in the West Bank town of Bethlehem on Friday. Mahmoud Illean/AP hide caption

Palestinian scout bands parade through Manger Square at the Church of the Nativity, traditionally believed to be the birthplace of Jesus Christ, during Christmas celebrations, in the West Bank town of Bethlehem on Friday.

From Bethlehem and Frankfurt to London and Boston, the surging coronavirus put a damper on Christmas Eve for a second year, forcing churches to cancel or scale back services and disrupting travel plans and family gatherings.

Drummers and bagpipers marched through Bethlehem to smaller than usual crowds after new Israeli travel restrictions meant to slow the highly contagious omicron variant kept international tourists away from the town where Jesus is said to have been born.

In Germany, a line wound halfway around Cologne’s massive cathedral, not for midnight Mass but for vaccinations. The offer of shots was an expression of “care for one’s neighbor” that was consistent with the message of Christmas, cathedral provost Guido Assmann told the DPA news agency.

Around the world, people weary from nearly two years of lockdowns and other restrictions searched for ways to safely enjoy holiday rituals.

“We can’t let the virus take our lives from us when we’re healthy,” said Rosalia Lopes, a retired Portuguese government worker who was doing some last-minute shopping in the coastal town of Cascais.

She said she and her family were exhausted by the pandemic and determined to go ahead with their celebrations with the help of vaccines and booster shots, rapid home tests and mask-wearing in public. She planned a traditional Portuguese Christmas Eve dinner of baked cod.

In New York City, where omicron has spread widely, people waited in long lines to get tested, many doing so as a precaution before traveling to reunite with family.

Brianna Sultan and her daughter Ava, 8, spent Friday in one of those long lines waiting for a test after they got word of another infection at school.

“It’s a terrible way to be spending Christmas Eve,” Sultan said after more than two hours in line and as the chill deepened into the evening in New York City’s Harlem neighborhood. “It’s terrible that we can’t see our families because this COVID strain is coming back up again.”

Holiday travel was dealt a blow when major airlines canceled hundreds of flights amid staffing shortages largely tied to omicron.

Sadia Reins arrived in New York City from Alexandria, Virginia, on Friday to be with with her 75-year-old mother. Reins said the two haven’t spent Christmas together in two years, and despite the risks in traveling during the outbreak, she couldn’t bear to be apart from her mother again this year.

Members of the winter swimming club “Pirrlliepausen” go into Lake Senftenberg, which is four degrees cold (39 Farenheit) for their traditional Christmas swim, in Seftenberg, Germany, on Friday. Bernd W’stneck/dpa via AP hide caption

Members of the winter swimming club “Pirrlliepausen” go into Lake Senftenberg, which is four degrees cold (39 Farenheit) for their traditional Christmas swim, in Seftenberg, Germany, on Friday.

“We’re going to cry,” she said, adding: “We talk on the phone all the time, but it’s not the same as looking at someone.”

In Britain, where the coronavirus variant is ripping through the population, some houses of worship hoped to press on.

At St. Paul’s Old Ford, an Anglican church in East London, priests planned to hold services on Christmas Eve and Christmas Day. But to protect parishioners, the church called off its Nativity play.

“You might have to cancel the service, but you can’t cancel Christmas,” said the Rev. April Keech, an associate priest. “You can’t stop love. Love still stands.”

Numerous churches in the U.S. canceled in-person services, including Washington National Cathedral in the nation’s capital and historic Old South Church in Boston. Others planned outdoor celebrations or a mix of online and in-person worship.

In Rome, a maskless Pope Francis celebrated Christmas Eve Mass before an estimated 2,000 people in St. Peter’s Basilica, where admission was limited and worshippers had to wear masks.

While the number of faithful was far more than the 200 allowed in last year, it was a fraction of the 20,000 the basilica can seat. Before the pandemic, St. Peter’s was routinely packed for midnight Mass.

Women wearing masks to curb the spread of the coronavirus work on decorations to celebrate Christmas at a church in Bali, Indonesia, on Friday. Firdia Lisnawati/AP hide caption

Women wearing masks to curb the spread of the coronavirus work on decorations to celebrate Christmas at a church in Bali, Indonesia, on Friday.

In Germany, churchgoers faced a thicket of health restrictions and limits on attendance. Some had to show proof of vaccination or testing.

Frankfurt’s cathedral, which can hold 1,200 people, offered only 137 socially distanced spaces, all of which were booked days in advance. Singing was allowed only through masks.

People in the Netherlands tried to make the best of the holiday, despite living under one of the strictest lockdowns in Europe. All nonessential shops were closed, including bars and restaurants, and home visits were limited to two people per day, four on Christmas.

“We are just meeting with some small groups of family for the next few days,” Marloes Jansen, who was waiting in line to buy the traditional Dutch kerststol, a Christmas bread with fruits and nuts.

A glitch in a computerized appointment system prevented scores of people from scheduling COVID-19 tests and undermined the government’s efforts to administer booster shots in a country already lagging far behind its neighbors.

In France, some visited loved ones in the hospital. In the Mediterranean city of Marseille, the intensive care unit at La Timone Hospital has been taking in more and more COVID-19 patients in recent days.

Amelie Khayat has been paying daily visits to her husband, Ludo, 41, who is recovering from spending 24 days in a coma and on a breathing machine.

They touched their heads together as she sat on his bed, and now that he is strong enough to stand, he got up to give her a farewell hug, as a medical worker put final decorations on the ICU Christmas tree.

Parisians lined up at chocolate shops, farmers’ markets and testing centers. France has posted record numbers of daily COVID-19 infections, and hospitalizations have been rising, but the government has held off on imposing curfews or closings during the holidays.

“It does affect our enthusiasm to celebrate Christmas. It does makes us a bit sad. But at least we are sure not to contaminate or get contaminated. We will all do the test in our family,” said Fabienne Maksimovic, 55, as she waited in line at a pharmacy in Paris to get tested.

In Antwerp, Belgium, Christmas trees hung upside down from windows in a protest against the closing of cultural venues.

In Bethlehem, the scene was much more festive than it was a year ago, when musicians marched through empty streets. This year, hundreds of people gathered in Manger Square as bagpipe-and-drum units streamed through.

Before the pandemic, Bethlehem would host thousands of Christian pilgrims from around the world. The lack of visitors has hit the city’s hotels, restaurants and gift shops especially hard. 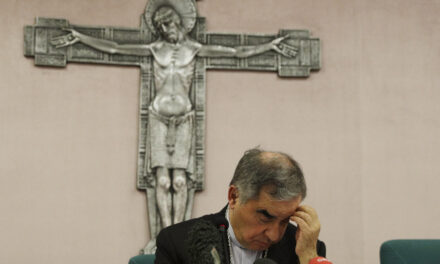 The Vatican Indicts 10, Including A Former Cardinal, Over A London Real Estate Deal 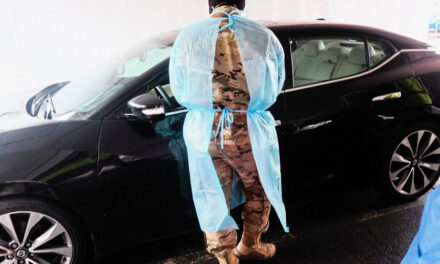 Biden to Announce Military Help for Hospitals in 6 States 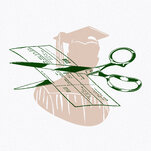