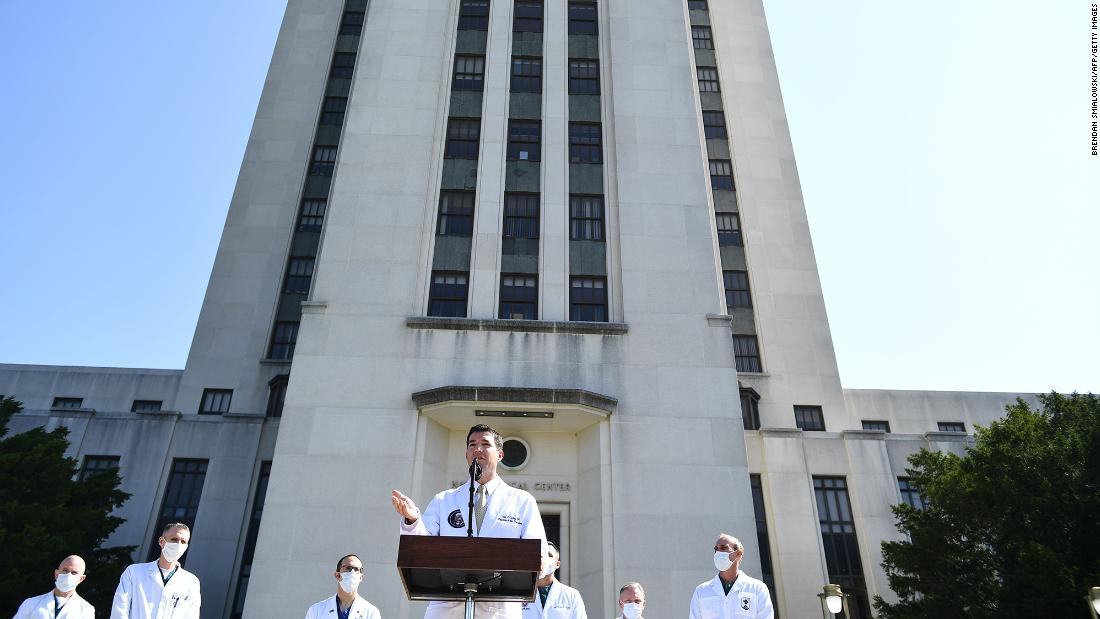 The episode neatly illustrates the unusual position of the President’s physician, who is bound by law and ethics to protect his patient’s privacy but whose knowledge is also a matter of public interest. Trump, who has a known aversion to illness and was in the middle of an intense presidential campaign at the time of his positive test, cultivated unique relationships with his two White House doctors, each of whom generated controversy during his tenure.

While Trump denied having Covid prior to the first debate, the positive result on September 26, 2020, sparked fresh concerns that Trump put his Democratic opponent at risk in the debate hall, along with the dozens of aides and visitors — including Gold Star families attending a reception — whom Trump met with at the White House while maintaining a full schedule.

Trump’s positive test — which was followed by a negative result in that same timeframe, several days before he was hospitalized due to Covid-19 — was revealed via Mark Meadows’ memoir, “The Chief’s Chief,” a copy of which was obtained by The Guardian ahead of the book’s publication next week.

Art Caplan, a bioethicist and the director of the Division of Medical Ethics at New York University’s Grossman School of Medicine, told CNN that as Trump’s doctor, Conley had a duty to his patient, meaning he wouldn’t share information without the President’s permission. “That leaves the public in many ways in the dark about serious problems that might come up,” he said.

But Conley also had a duty to warn as a physician, Caplan argued, if his patient could have put others at risk.

Caplan added: “It’s probably the last thing you ever do as the White House doctor if you do it, but nonetheless, you have a duty to protect people from harm, and exposing people to Covid is absolutely dangerous, and I think requires you to break the presumption of privacy.”

Conley, a Navy commander who was Trump’s doctor from 2018-2021, isn’t the only White House physician facing scrutiny. Former White House doctor-turned Republican congressman Ronny Jackson of Texas faced criticism this week for making the false suggestion that the new Covid-19 Omicron variant was a “midterm election variant” invented by Democrats so they could push “unsolicited nationwide mail-in ballots” during next year’s elections.

Jackson was Conley’s predecessor at the White House Medical Office, where he convened an extraordinary news conference describing Trump in “excellent health” after his 2018 physical exam, despite evidence of heart disease and borderline obesity. Later, after Trump nominated Jackson to become Veterans Affairs secretary, allegations of misconduct emerged, including drinking on the job. A subsequent Defense Department inspector general report earlier this year offered a scathing review of Jackson’s conduct as White House doctor.

As White House doctors, both Conley and Jackson were serving the Navy. But they answered to the White House — not the Pentagon — in their roles as White House military officials.

When Jackson was investigated by the Defense Department inspector general over his conduct as White House doctor, it was the result of the inspector general receiving specific complaints about him. So far, there is no indication of any complaints being made against Conley.

A Navy official referred CNN to the White House when asked for comment on Conley. Conley has not responded to CNN’s request for comment.

The job of the White House doctor is a unique one; while they oversee a team of physicians and nurses who tend to administration staff, their primary role is overseeing the health of a single patient: the President. A White House doctor travels everywhere the President does, often trailing close behind with a medical bag. They ensure pints of blood in the President’s type are ready aboard Air Force One in case of an emergency and conduct annual physicals at Walter Reed National Medical Center.

The close proximity can generate a relationship that goes beyond the typical patient-doctor dynamic. Biden, who replaced Conley with Dr. Kevin O’Connor as his doctor after taking office, asked O’Connor to join him when he met Pope Francis at the Vatican in October.

It’s not uncommon for a president to name his own physician when taking office, though Biden’s two most recent predecessors each retained the incumbent doctor who had attended the men who served before them.

The shielding of a president’s health problems is nothing new. But the questions surrounding the conduct of Trump’s White House doctors underscore how the last administration’s willingness to mislead — and lie outright — often permeated all corners of 1600 Pennsylvania Avenue.

The decision to keep Trump’s first positive test a secret was condemned by at least one former White House aide, Alyssa Farah, who said Trump showed “a flagrant lack of regard for public health” by not disclosing the positive test.

“If I were the White House physician and I was told, ‘Don’t say anything about this,’ I would resign,” Reiner said.

According to the Guardian, Conley called Meadows the night of September 26 when Trump was en route to a rally in Pennsylvania, telling him Trump had tested positive. Meadows wrote that Conley told him, “Stop the President from leaving. He just tested positive for Covid,” according to the excerpt.

Trump was subsequently tested again and received a negative result. Meadows wrote that Trump took the negative test as “full permission to press on as if nothing had happened.”

“I didn’t want to take any unnecessary risks,” Meadows wrote, according to The Guardian, “but I also didn’t want to alarm the public if there was nothing to worry about.”

In a statement Wednesday, Trump said, “In fact, a test revealed I did not have Covid prior to the debate.”

Trump announced that he and first lady Melania Trump had tested positive for Covid-19 early on October 2, and he was hospitalized later that day. In the days between Trump’s first positive test and his publicly disclosed positive result on October 1, Trump held events at the White House, including a White House reception for Gold Star families. He also participated in the first debate with Biden on September 29 in Cleveland, where he arrived too late to be tested. And he held a rally in Minnesota the day after the debate.

After Trump was hospitalized on October 2, Conley faced a wave of questions about the President’s condition, coming under fire for offering an upbeat diagnosis at the same time that Meadows had given a more alarming assessment of Trump’s health.

Conley was also criticized for not disclosing that the President was administered oxygen, which he said was because he wanted to “reflect the upbeat attitude of the team.”

Subsequent reporting has revealed Trump was sicker than was disclosed at the time.

Explaining the reason for his rosy assessment, Conley said at the time, “I was trying to reflect the upbeat attitude that the team, the President, his course of illness has had. I didn’t want to give any information that might steer the course of illness in another direction, and in doing so it came off that we were trying to hide something.”

During his briefings, Conley was pressed by reporters about when the President last received a negative Covid-19 test. He would not answer.

“I’m not going to get into all the testing going back, but he and all the staff routinely are tested,” Conley said on October 3.

“I don’t want to go backwards,” he said on October 5 when he was asked again about when Trump last tested negative.

The long history of secrecy

Trump’s Covid diagnosis was hardly the first time a President’s health has come under scrutiny — and been shielded by the White House.

Timothy Naftali, a CNN presidential historian and professor at New York University, wrote last year following Trump’s diagnosis about how frequently presidential health problems are concealed. He explained how 100 years earlier, White House doctors covered up President Woodrow Wilson’s bout with the flu and the mild stroke he suffered in 1919. Naftali noted that the ailments of subsequent presidents, including Franklin D. Roosevelt and John F. Kennedy, were kept from the public, too — though they were not dealing with communicable diseases that could be spread to those around them.

“The health of the president is treated both as a national security secret and as a matter of presidential privacy,” Naftali said. “And when presidents are seriously ill, the wall of secrecy is even thicker.”

In the nuclear era, Naftali said, health problems have often been downplayed or kept hidden for national security reasons, under the argument that US adversaries shouldn’t know that the commander in chief is in a weakened state. But Naftali argued that once a president has left office, records surrounding a president’s health, which are now often kept private, should be put into the public view.

Under the Presidential Records Act, an outgoing president can restrict access to medical records for 12 years, according to the Congressional Research Service.

“At a certain point, that national security argument disappears, which is why we should know everything about President Trump’s bout with Covid,” he said. “There is no national security reason — which one could argue there was one in the fall of 2020 — at this point not to know exactly when he tested positive.”

CNN’s Barbara Starr and Jen Christensen contributed to this report.

Biden Pledges To Dismantle Trump’s Sweeping Immigration Changes — But Can He Do That? : NPR 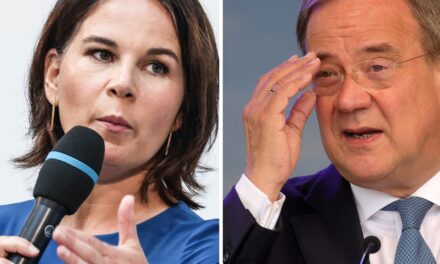 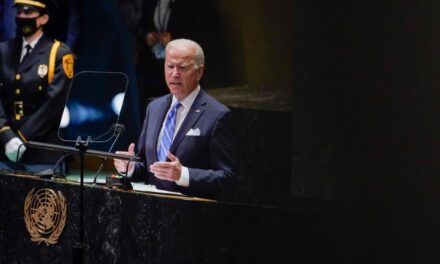 Analysis: Why it’s getting even harder for Biden to pass his legacy-defining agenda