Waukesha parade crash suspect appeared to have no emotion as officers tried to stop him, authorities say 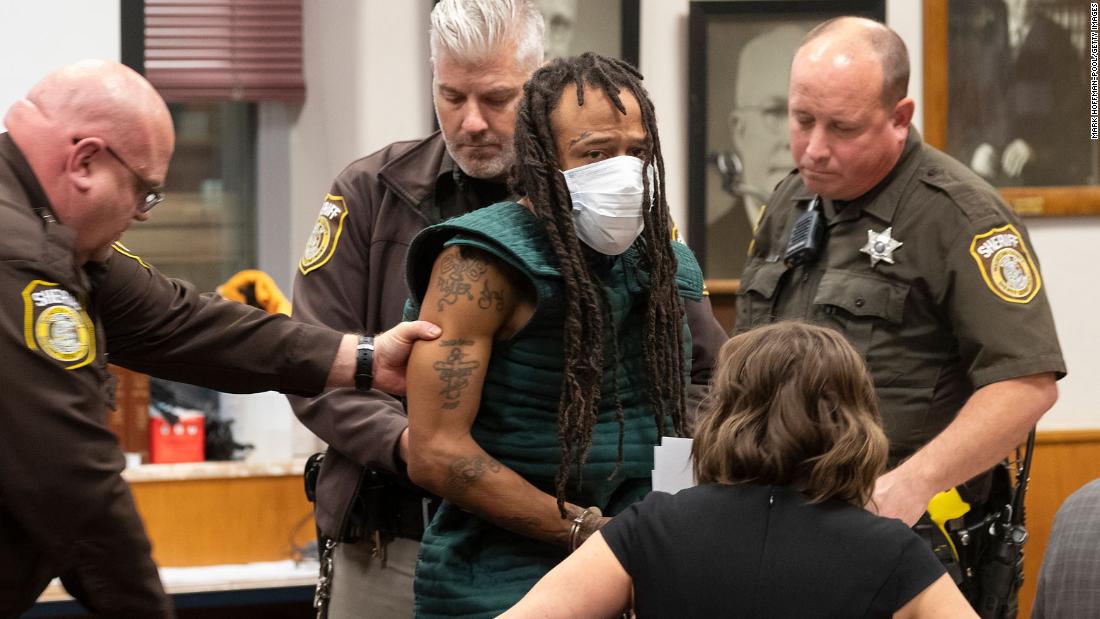 (CNN)Shortly before an SUV barreled into a crowd of parade marchers and pedestrians on Sunday in Waukesha, Wisconsin, at least one officer described the driver as having “no emotion” on his face during attempts to slow him down.

At least six people were killed and another 62 were injured in the ensuing crash, according to a criminal complaint filed Tuesday in Waukesha County Circuit Court. The youngest victim who died was only 8 years old, according to his family’s GoFundMe. More than a dozen people remain hospitalized at a nearby children’s hospital.

Darrell E. Brooks, 39, was later apprehended by police and officially charged Tuesday with five counts of first-degree intentional homicide, according to the Waukesha County District Attorney’s Office. Prosecutors said they will consider an additional homicide charge following the death of a sixth person on Tuesday from sustained injuries.

Multiple officers with the Waukesha Police Department attempted to get the driver, who is suspected by authorities to be Brooks, to stop or turn around as he came upon the parade route, according to the complaint.

One officer, identified in the complaint as Detective Casey, first heard a horn honking near his location along the parade route. As Casey went to investigate, he saw a red Ford Escape SUV driving past parade participants and “observed people jumping out of the way,” according to the complaint.

The SUV was moving at a slow speed at the time, the complaint said, and Casey pounded on the hood of the vehicle while yelling “Stop” multiple times. The SUV brushed past Casey and continued further toward the procession.

Casey chased the vehicle on foot as it began to be driven faster, the complaint said, and radioed for assistance. Seconds later, other reports came in over the police radio that people were being hit by the vehicle.

Another officer, identified as Officer Butryn, also tried to get in front of the SUV, yelling at the driver to “Stop, stop the vehicle,” according to the complaint. The officer estimated the vehicle was moving at around 25 miles per hour at the time.

“Officer Butryn observed the driver looking straight ahead, directly at him, and it appeared he had no emotion on his face,” the complaint said.

The SUV passed Butryn, at which point he saw the vehicle increase in speed until it reached an intersection where it appeared to stop, the complaint said.

“The vehicle then appeared to rapidly accelerate, as Officer Butryn heard tires squeal,” the complaint read. “At this point, it was clear to Officer Butryn that this was an intentional act to strike and hurt as many people as possible.”

Butryn saw the vehicle driving in a zig-zag-like pattern, the complaint said, and saw “bodies and objects” flying.

“It was like the SUV was trying to avoid vehicles, not people. There was no attempt made by the vehicle to stop, much less slow down,” one witness told an officer, according to the complaint.

After witnessing the SUV running over people, another officer identified in the complaint as Officer Scholten shot at and struck the vehicle three times as it sped away. Authorities do not believe any shots were fired from the vehicle, Waukesha Police Chief Dan Thompson said Sunday.

Brooks sought help from a stranger

After Brooks allegedly fled the scene, he asked a stranger for assistance and stated he was homeless, according to a Waukesha resident.

Daniel Rider, 24, told CNN that he was unaware of what had happened Sunday when he heard the doorbell ring at his house.

A man — identified by authorities as Brooks — asked for Rider’s help, saying he was homeless and needed to borrow a phone to call an Uber. Rider said Brooks was not wearing shoes and only wearing a t-shirt on a cold day, so he said he believed him and allowed him into the home.

“He was pretty flustered,” Rider said of Brooks, but described him as polite during their encounter. Rider made Brooks a sandwich and let him borrow a jacket as he used his phone.

After a few minutes, Rider noticed police going up and down the street and had a feeling it was in relation to Brooks, so Rider asked him to step outside. As Brooks spoke on the phone, the two were outside when Rider said a nearby neighbor flagged him to the situation. Rider then went to Brooks and asked for his phone and jacket back, he said, and Brooks complied. Rider entered the home and then locked the door.

Shortly after, Brooks began “pounding on the door,” Rider said, claiming he left his ID inside. Rider refused and told him he would look for it. Moments later, police arrived and arrested Brooks.

Rider said Brooks had called his mother to have an Uber to pick him up. “Uber showed up maybe a minute after he was in custody,” Rider said. “So I just think about sometimes if he’d gotten in that car, what could have happened?”

Brooks’ bail has been set at $5 million following his initial court appearance Tuesday, with the judge citing potential flight risks.

Brooks had been out on bail after allegedly running over a woman who said she’s the mother of his child earlier this month, according to court documents.

6 people have died from injuries

Another victim was identified Tuesday as Jackson Sparks, 8, according to the family’s verified GoFundMe page. It is not immediately clear if Jackson is the sixth parade death mentioned by prosecutors and confirmed by Children’s Hospital of Wisconsin.

“This afternoon, our dear Jackson has sadly succumbed to his injuries and passed away,” an update post to the page said Tuesday.

Two of the 16 children admitted to Children’s Hospital of Wisconsin were able to go home Monday, the hospital said in a statement. A total of 13 children remain hospitalized, with six in critical condition, three in fair condition and four in good condition, the statement said.

One of the injured, a firefighter’s son, has just been moved out of the Children’s Hospital of Wisconsin Intensive Care Unit, according to his father Don Tiegs.

Erick Tiegs was marching with Waukesha South High School Marching Band when he was struck by the SUV, according to a news release by Caledonia Firefighters Association.

“He has undergone surgery to repair a broken femur. He is still being treated for other injuries, including placement of a chest drainage tube, and is continuing to be assessed for any further complications. Unfortunately, he has a long road to recovery ahead of him,” read the release.

Plague of Mice in Australia Overruns Farms, Shops and Bedrooms