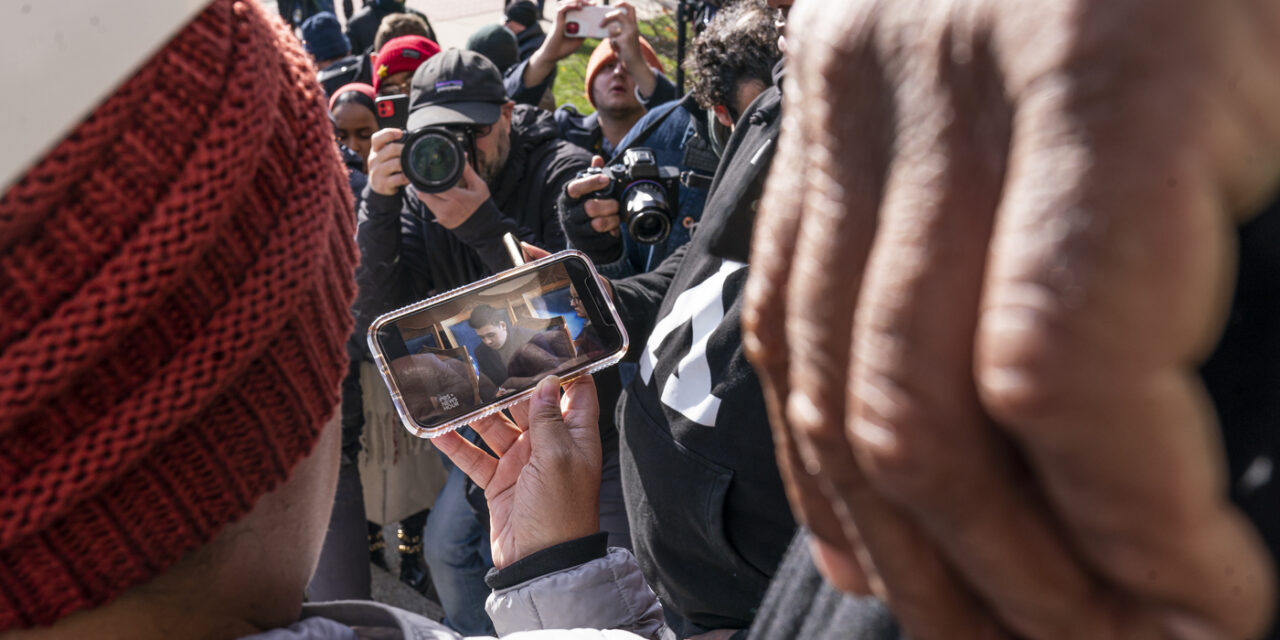 Bystanders on the steps of the courthouse watch as the verdict is read in the trial of Kyle Rittenhouse. Legal experts said Rittenhouse’s claim of self-defense was strong from the beginning. Nathan Howard/Getty Images hide caption

Bystanders on the steps of the courthouse watch as the verdict is read in the trial of Kyle Rittenhouse. Legal experts said Rittenhouse’s claim of self-defense was strong from the beginning.

After 27 hours of deliberation over the course of four days, a jury declared Kyle Rittenhouse not guilty on the five charges he faced after fatally shooting two people and wounding a third during a night of unrest in Kenosha, Wis., last year.

Rittenhouse trembled as the verdict was read, count by count, then collapsed in sobs.

“There were times we doubted the case. There were times when we were confident,” said Mark Richards, Rittenhouse’s lead defense attorney, speaking to reporters outside the courthouse after the verdict was read.

Rittenhouse faced five felony counts after he shot and killed Joseph Rosenbaum, 36, and Anthony Huber, 26, and wounded Gaige Grosskreutz, then 26. The most serious charge, first-degree intentional homicide, carried a mandatory sentence of life in prison.

Though jurors did not speak to the media to explain their decision, legal experts contacted by NPR throughout the trial said an acquittal was not surprising.

“I think that anyone who saw the evidence could see that the jury might have a difficult time coming to a unanimous decision that Kyle Rittenhouse wasn’t defending himself,” said Julius Kim, a defense attorney and former prosecutor based in the Milwaukee area.

Rittenhouse had a strong self-defense case

Prosecutors said that Rittenhouse had put himself in danger through a series of reckless choices: He came to Kenosha during a period of violent and destructive riots; he armed himself with an AR-15-style rifle; he stayed there past curfew and after being separated from his group. They emphasized that he was the only person there to shoot someone.

But the law of self-defense in Wisconsin allows someone to use deadly force if they have reasonably believe they are in imminent danger of death or great bodily harm.

“And if so, he’s allowed to use essentially as much force as he thinks is reasonably necessary to stop the threat,” said Kim.

Rosenbaum, the first person Rittenhouse shot, had acted belligerently throughout the night, according to video evidence and witness testimony. Later, he chased Rittenhouse through a used car lot. Rittenhouse and another witness both testified that Rosenbaum had reached for Rittenhouse’s gun. Rittenhouse shot four times within a second, killing him.

“Mr. Rosenbaum was chasing me. I pointed my gun at him, and that did not deter him. He could have ran away instead of trying to take my gun from me, but he kept chasing me. It didn’t stop him,” Rittenhouse testified last week.

Afterward, Rittenhouse ran away toward a police line, he said during the trial. While he was running, several people started to chase him, including Huber and Grosskreutz. Huber struck Rittenhouse with a skateboard, evidence showed, and Grosskreutz was armed with a Glock pistol.

Prosecutors said that the two men had believed Rittenhouse was an “active shooter” and were trying to disarm him. But Rittenhouse testified that he feared for his life.

The defense had a “very disciplined message” throughout the trial, said Steven Wright, a law professor at the University of Wisconsin. They consistently emphasized Rittenhouse’s stated intentions that night — acting as a medic and protecting private property — and the threats to his safety, Wright said.

That message was clearest when Rittenhouse himself testified, a turn on the stand that several experts said was very effective for the defense.

“He was very well-prepped. He did not come off as smug or indignant,” said Charles Coleman Jr., a civil rights lawyer and former prosecutor, who said that Rittenhouse came off like a “regular teenager.” “That needed to be something that the jury was reminded of.”

In Wisconsin, once a defendant has made a self-defense claim, prosecutors must then disprove it “beyond a reasonable doubt,” experts explained.

The prosecution’s case depended on video evidence that was often dark and blurry. One key video was shot from far away, and in others, the action was at times obstructed, making it difficult to draw definitive conclusions.

“Some of the video footage, some of the still frame shots appeared to support the self-defense claim,” said Chris Zachar, a criminal defense attorney based in La Crosse, Wis., who said prosecutors had “squandered” their case.

Prosecutors attempted to persuade jurors that Rittenhouse had provoked the encounter with Rosenbaum, which would have undercut his self-defense claim. But the interaction they described as Rittenhouse pointing his rifle at other people before the chase was captured only by a single drone video, filmed from over a block away, in which Rittenhouse and Rosenbaum are tiny and distant.

Another video that captured Rittenhouse’s encounter with Huber and Grosskreutz was analyzed frame by frame during the trial. Defense attorneys and prosecutors urged jurors to draw opposite conclusions from it — including, crucially, whether Grosskreutz had pointed his pistol at Rittenhouse before being shot.

“The state has to prove that Kyle Rittenhouse provoked the attack by proof beyond a reasonable doubt. And so, the question is: If everyone in that courtroom is still not sure, if the judge wasn’t sure, then how are 12 jurors going to be sure?” said Kim.

The state’s own witnesses at times helped Rittenhouse’s case

Prosecutors called more than a dozen witnesses to help make their case. But legal experts said that, at times, those witnesses seemed to bolster Rittenhouse’s self-defense claim.

The state called two men who had accompanied Rittenhouse that night also intending to help protect private property. Both witnesses, Ryan Balch and Jason Lackowski, said Rosenbaum asked to be shot and “false-stepped” armed men in an attempt to provoke a reaction. One described him as “hyperaggresive.”

“They all painted a picture that Mr. Rosenbaum was definitely the aggressor,” said Wright of the University of Wisconsin. “There was testimony that he lunged for the gun.”

Another of the state’s witnesses, Richie McGinniss, a video director for a right-wing news site who witnessed the Rosenbaum shooting, testified that Rosenbaum was reaching for Rittenhouse’s rifle.

And Grosskreutz, who was prosecutors’ star witness as the only person who survived being shot by Rittenhouse, gave testimony that underscored the challenge facing prosecutors.

Grosskreutz ran after Rittenhouse after the first shooting and was approaching him, Glock pistol in hand, as Rittenhouse shot Huber. Grosskreutz testified that he believed Huber was trying to harm Rittenhouse.

For a moment, Grosskreutz paused and raised his hands in the air, gun held limply in his right hand.

But then he saw Rittenhouse adjusting his weapon, he testified, so he brought his arms back down and moved toward Rittenhouse. In doing so, he pointed his weapon at Rittenhouse, he admitted during cross-examination.

“It wasn’t until you pointed your gun at him — advanced on him with your gun, now your hands down, pointed at him — that he fired, right?” defense attorney Corey Chirafisi said.

Kim, the former prosecutor, pointed to that exchange as an especially bad moment for the prosecution.

“I think the defense did an effective job of taking one of the state’s witnesses and using him to start building their case,” he said. “There were times where I had to remind myself who called him as the witness.” 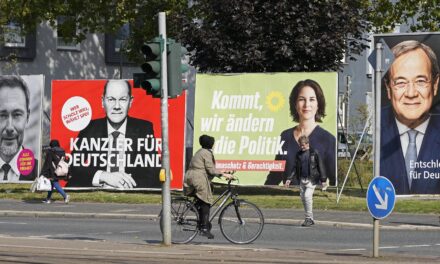 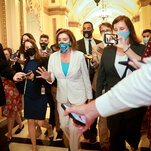 ‘This Is the Biden Agenda’