Flu Shots Lag in the U.S. 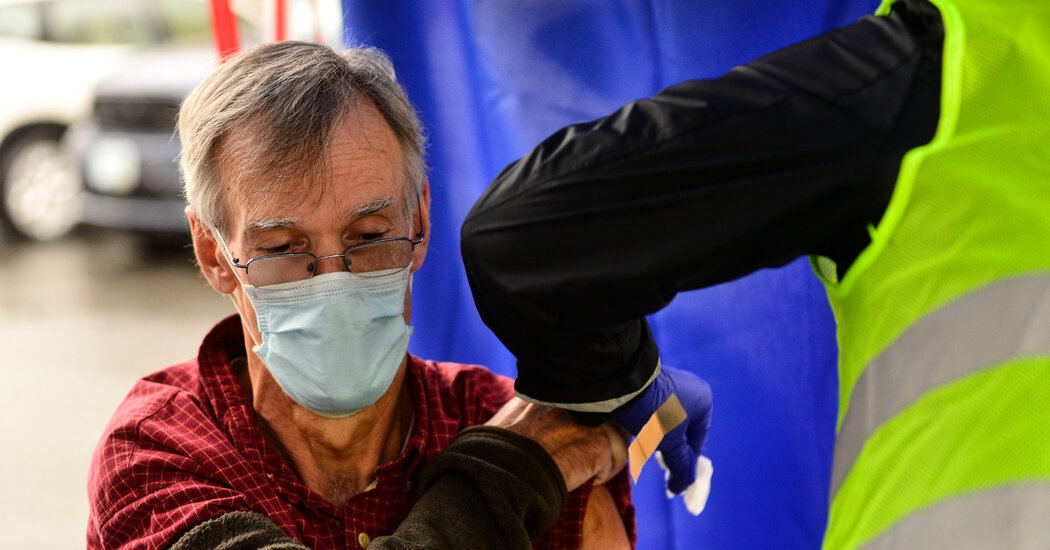 Last year, fear of simultaneous coronavirus and influenza pandemics drove more Americans than usual to get their flu shots. That, combined with distancing and masking measures, made the 2020-21 flu season remarkably tame.

As of Oct. 29, 158.7 million flu vaccine doses had been distributed in the United States, according to the Centers for Disease Control and Prevention. That is down roughly 8 percent from the 172.3 million doses that had been distributed at the same time last year, and health officials across the country — in Michigan, in San Diego, in Ventura County, Calif., and elsewhere — have been sounding alarms.

“I think any indication that we’re going to have lower flu vaccination rates is of concern,” said Dr. Richard Webby, a faculty member of the Infectious Diseases Department at St. Jude Children’s Research Hospital.

Dr. Webby said that because of the highly abnormal flu season last year, scientists don’t have a good grasp on how severe the coming season is likely to be. Since flu hasn’t been circulating for a season and a half, he said, fewer people may have lingering immunity to the virus than in a normal year.

“We’re just headed into, really, an unknown,” he said. “We’re certainly not the best at predicting flu seasons in a typical year, and this is anything but a typical year.”

Even without the coronavirus also circulating, a bad flu season could strain health care systems. And the United States has seen many times over how quickly a surge in Covid-19 cases can overwhelm hospitals entirely, making it impossible for them to properly care for patients with other medical emergencies, like severe influenza. The prospect of both viruses surging at the same time has horrified doctors from the start.

With coronavirus case rates plateauing at a high level nationally — and rising in some states — and with coronavirus vaccination rates still lagging behind the rates in most other wealthy countries, American hospitals are hardly in a position to handle more stress.

But Dr. Webby said that the good news is that the flu season has not yet begun in earnest — which means there is still time for people to get their shot.

Austria on Monday began a targeted lockdown against unvaccinated people, confining adults and minors ages 12 and older to their homes.

The move, which is aimed at calming the worst surge in infections the country has faced since the pandemic started, is believed to be one of the first national lockdowns directed at the unvaccinated, and is initially expected to last 10 days.

“We do not take this step lightly,” Chancellor Alexander Schallenberg said at a news conference on Sunday.

Source: Center for Systems Science and Engineering (CSSE) at Johns Hopkins University. The daily average is calculated with data that was reported in the last seven days.

Starting Monday, those who cannot prove that they are either fully vaccinated or immune from a past infection can only leave their dwellings for essential reasons, such as going to the doctor or for essential grocery shopping. Officials warned that they would increase police patrols to enforce the rules, and that those found to be violating them could be fined up to 1,450 euros, or $1,660, The Associated Press reported.

Karl Nehammer, the country’s interior minister, announced wide-ranging police measures, such as checking vaccination records, and laid out some of the fines people would face if caught breaking the rules.

Austria is currently averaging 10,395 cases a day, according to the Center for Systems Science and Engineering at Johns Hopkins University. Less than 65 percent of the country is fully vaccinated, one of the lowest rates in the European Union.

The new lockdown, which comes a week after an announcement that most businesses were required to check customers for proof of vaccination or immunity, essentially aims to keep the estimated two million unvaccinated Austrians off the streets as cases are surging.

Outside the chancellery in Vienna on Sunday, where Mr. Schallenberg, his interior and health minister were announcing the new restrictions, a crowd gathered to protest them.

Several lawmakers had called for a general lockdown to bring down the numbers, but the country’s health minister pointed out on Sunday that while the overall infections were going up, the infections among the immunized were actually decreasing.

Japan’s economy continued to wobble in the third quarter of 2021, tipping back into contraction, but the success of its coronavirus vaccination campaign suggests that brighter days may be ahead, at least in the near term.

In the July-to-September period, the country’s economy, the third largest after the United States and China, shrank by an annualized rate of 3 percent, government data showed on Monday. The result, a quarterly drop of 0.8 percent, indicated an economy struggling to find its footing in the face of coronavirus restrictions and a supply chain crunch that hit its biggest manufacturers. The previous three-month period saw a slight expansion.

But Japan now has one of the highest vaccination rates among major nations, and it has lifted virtually all restrictions on its economy as its virus caseload has fallen in recent weeks to one of the lowest levels in the world.

Seventy-five percent of the country is fully vaccinated. And coronavirus case counts have hovered in the low hundreds since mid-October, a decline of about 99 percent since their August peak, heralding the return of long-suppressed consumer spending.

Bolstering the positive outlook, policymakers, fresh off an election, are preparing a new round of stimulus that would provide support to ailing businesses and put cash in the hands of people nationwide.

Source: Center for Systems Science and Engineering (CSSE) at Johns Hopkins University. The daily average is calculated with data that was reported in the last seven days.

The country started the July-to-September period on the back foot because of a clunky vaccine rollout that left it far behind its peer countries. The Delta variant caused cases to surge just as Tokyo prepared to kick off the Summer Olympics, which were conducted without spectators and failed to deliver the economic boost that had been promised when the country was chosen as host.

As the virus spread, Japan entered a new state of emergency. Restaurants and bars closed early and travel dried up, with many people deciding to stay home rather than brave record-high case counts.

Since the country ended its state of emergency last month, however, foot traffic has nearly returned to prepandemic levels, said Tomohiko Kozawa, a researcher at the Japan Research Institute.

“There’s a risk that infections could begin to spread again, but for the moment, the outlook points to recovery,” he said, adding that “we can expect high growth” in domestic consumption in the coming months.

Dr. Vivek Murthy, the U.S. surgeon general, said on Sunday that if courts continue to block the Biden administration’s efforts to soon compel large companies to require a Covid vaccine or face weekly testing, it would be “a setback for public health.”

A federal appeals court issued a ruling on Friday that continued to block the administration’s rule, saying the federal agency that drafted the order had “grossly” exceeded its purview.

The Occupational Safety and Health Administration, an agency within the Labor Department, issued a rule this month that companies with 100 or more employees must put a vaccine mandate in place by Jan. 4 or comply with weekly testing, as well as mandatory masking in December.

The administration’s attempts — which could affect 84 million private-sector workers, 31 million of whom were believed to be unvaccinated — have met with considerable resistance. A diverse group of states and business organizations immediately contested the order and the Court of Appeals for the Fifth Circuit in New Orleans issued a stay. The ruling by a three-judge panel on Friday affirmed the stay, turning aside a challenge by the Justice Department.

On “Fox News Sunday,” Dr. Murthy said that vaccine mandates are well-established and highly successful in achieving more widespread vaccination. Schools, the military and workplaces such as hospitals have long required vaccines. Many companies have leapt ahead of a federal order, he noted, and imposed one on their own employees.

At the heart of the vaccine mandate strategy, he said, is the creation of “safer workplaces for workers, for customers and to increase vaccination rates overall, because that’s ultimately how we’re going to end this pandemic.”

But Ken Paxton, the attorney general of Texas, one of the plaintiffs that challenged the mandate, said on the same news program that the ruling was a victory against the Biden administration’s attempt at what he has called “bullying” of businesses. Texas employers, he has stated, should be allowed to make their own decisions about the vaccine.

Chris Wallace, the host of the program, pointed out that Gov. Greg Abbott of Texas has banned businesses from ordering vaccine mandates. He asked Mr. Paxton to address the seeming incongruity between his attack on the federal mandate and his support of the state ban of individual employers’ mandates.

He continued: “States have a lot of authority to deal with what’s going on in their states.”

Several dozen New York City workers have been suspended without pay as a part of an investigation into the use of fake vaccine cards at the Department of Sanitation, a city official with knowledge of the investigation said.

The investigation will include a thorough review of vaccination records to determine how widespread the fraud might be, said the official, who was not authorized to comment on the investigation and spoke on the condition of anonymity. The development is the latest in a protracted debate over the city’s vaccine mandate for municipal workers.

The mandate took effect on Nov. 1, and roughly 9,000 city workers who had not received the shot were placed on unpaid leave, with thousands more applying for exemptions on medical or religious grounds. In the past month, vaccination rates have risen across city agencies, particularly in places like the Fire and Police Departments where opposition to the mandate had taken a strong hold.

The Department of Sanitation garnered particular attention for a single-day increase of nine percentage points — taking its ranks to 76 percent vaccinated from 67 percent almost overnight, according to City Hall.

The possibility that some of those vaccinations might have been fraudulent has shaken the department. A vast majority of the roughly 10,000 sanitation workers — over 87 percent — have received at least one shot, according to a city spokesman.

“These are very concerning allegations, and we take them very seriously,” Vincent Gragnani, press secretary for the sanitation department, said on Sunday. “Getting vaccinated is important to public health, and we do not tolerate anyone faking something that is a requirement of city employment.”

He confirmed that the department was “actively investigating this situation,” in coordination with the city’s Department of Investigation.

The investigation department said that it was “aware of allegations involving the issuance of bogus vaccination cards” and declined further comment.

The allegations were first reported in The New York Post on Saturday. It remains to be seen if criminal charges will be pursued. New Yorkers have been criminally charged for creating or using fake vaccine cards.

Harry Nespoli, president of the Teamsters Local 831 union representing sanitation workers, said that the investigation was still in its early stages, and he was not yet sure how many workers might be involved.

Mr. Nespoli has been a critic of the mandate, arguing instead for a testing option. He said that while the union disavowed any falsification of records, it would defend its members. 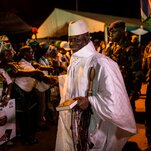 Abuses Under Gambia’s Ex-Ruler Should Be Prosecuted, Inquiry Says