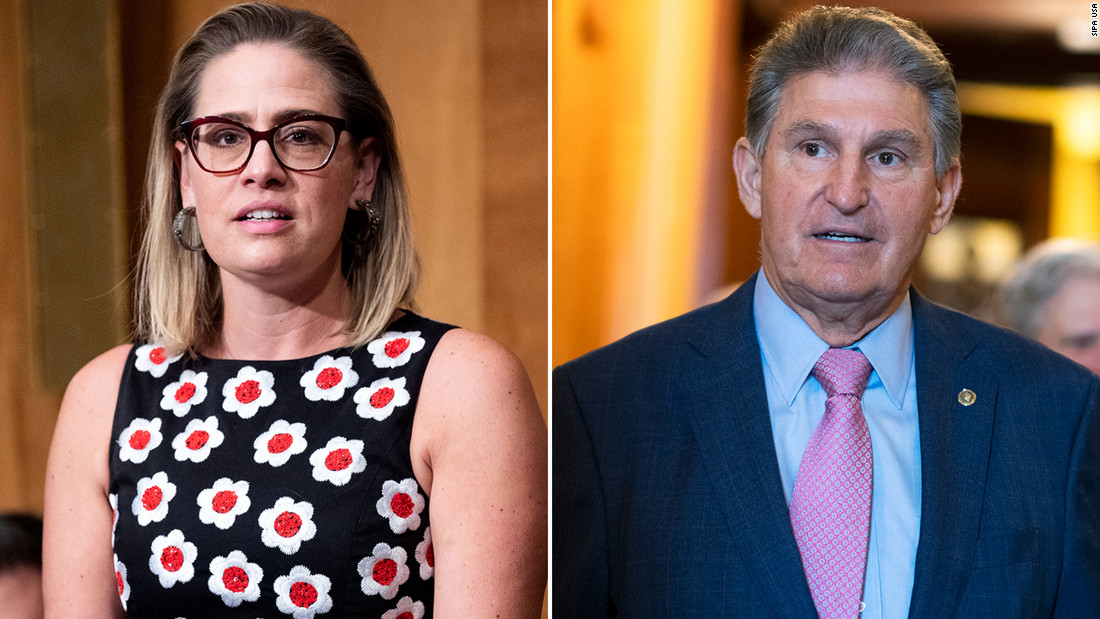 (CNN)She gets summoned to the White House for private audiences with President Joe Biden — and is in regular communication with Senate Majority Leader Chuck Schumer and his senior aides. And Republicans are hoping she will hold the line against liberals in her caucus.

Yet there are very few in the Capitol who know where Arizona Sen. Kyrsten Sinema actually stands, as she — along with West Virginia Sen. Joe Manchin — hold the key to her party’s agenda and potentially the fate of her party’s chances in next year’s midterm elections.

In interviews with a range of Democrats — including with House liberals, top leaders and key committee chairmen — patience is clearly wearing thin and anxiety is growing that the party could see the entirety of the agenda collapse amid deepening disputes between their warring moderate and progressive wings. There is nearly universal consensus: They want to hear Sinema and Manchin publicly detail their demands — and the price tag they’d accept for the bill.

“We just need to get a number right?” said Rep. Ro Khanna, a Democrat from California and member of the House’s progressive caucus. “The House is going to be unified. We need to get one number from one senator, and I think we got to make it very clear that that’s holding everything back.”

But sources familiar with the sessions said there were still ample areas of disagreement — and it was far from clear how quickly a deal could be reached.

The failure to get a deal with moderate senators over the bill’s scope, key policy details and its price tag — they want it slashed from its $3.5 trillion cost — has forced Speaker Nancy Pelosi to abruptly reverse course on her initial strategy. She had promised for months to hold a final vote on a trillion-dollar infrastructure bill until the larger economic package first was approved by the Senate.

But now, Pelosi is planning on moving the infrastructure bill first for a final vote on Thursday — due to a previous deal she was forced to cut with House moderates — without the larger economic plan close to finished.

And Schumer privately told his caucus on Tuesday he wasn’t consulted on Pelosi’s decision to reverse course, a rare break between the two party leaders. Manchin and Sinema didn’t address the caucus at the meeting, attendees said.

Other top Democrats are nervous as well — in large part because they don’t have a precise idea what Sinema and Manchin want.

“I am,” Senate Majority Whip Dick Durbin, the No. 2 in his caucus, said when asked if he’s concerned about Pelosi’s reversal. “We need to keep everybody together. … I don’t want to guess what Nancy’s challenges are. I respect her so much, and I’m sure she has a good reason. But I’m a little nervous.”

Asked if he had a good sense of what Manchin and Sinema want, Durbin said: “No, I don’t. Others may.”

Sen. Mazie Hirono, a Hawaii Democrat, added, “I and others are waiting for Kyrsten and Joe to tell us what is it that they like or don’t like, and then we can get it done, because other people have been waiting for all these programmatic areas of support for a long time.”

Privately, the assessment is much harsher.

“They’re a total moving target,” said one Democratic senator, who added they seem to have one thing in common: “A total lack of clarity.”

Sinema, as she raced between the Capitol and the White House Tuesday, declined to comment when asked about her demands. Manchin seemed to acknowledge that there’s high interest among his colleagues about his position, insisting Tuesday his talks with Biden are happening in “good faith,” even as he said he didn’t discuss a price tag with the President.

“It’s always been a very productive meeting with the President,” Manchin said. “We understand getting to know each other better and being understanding where his vision of the country is and the things he wants to do and I respect and appreciate all that. And he’s very good at listening and what my concerns may be — so we’ve always had very productive.”

Others appear weary of hearing about the moderates in their caucus.

Sen. Bernie Sanders, a Vermont independent and Budget Committee chairman, said bluntly: “I don’t want to talk about Sinema and Manchin. Talk to them.”

The disagreement within the Democratic caucus is not just over a few items, but over almost every major aspect of the President’s Build Back Better agenda.

How much to spend is only the first challenge. Democrats are growing uneasy about where Sinema and Manchin stand on several of the proposed tax increases on corporations, businesses and even wealthy individuals as well as the moderate senators’ positions on how bold to go on the social agenda and health care expansion.

Manchin, who hails from a coal-producing state, has raised concerns about the provisions dealing with climate change, telling CNN this week he has “big differences” with his party on the issue.

But Manchin also has sought to pare back a number of the benefits in the package — such as universal pre-K, tuition-free community college, the child tax credit expansion and new Medicare benefits, according to sources with knowledge of the matter.

Sinema, on the other hand, has been supportive of more aggressive climate change goals than Manchin. Yet, she has been concerned about corporate tax hikes, sources familiar with the matter said. And as she and Manchin have effectively vetoed a $3.5 trillion price tag, she has joined the West Virginia Democrat in raising concerns about the potential impacts of such a big bill on inflation.

“It is saddening to see them use Republican talking points,” Rep. Ilhan Omar, a progressive Minnesota Democrat, told CNN on Monday. “We obviously didn’t envision having Republicans as part of our party.”

Sinema, a former House member in her first Senate term and Manchin — who replaced the longest-serving senator in history, Robert Byrd, 11 years ago — both hold outsized power in the 50-50 Senate. With Democrats relying on a special budget process to advance the social safety package on a simple majority vote, one Democratic defection would be enough to sink the plan — and the two senators are the most likely to break ranks.

The two were central in cutting the bipartisan infrastructure deal that passed the Senate last month — but now are at risk of seeing that plan collapse as liberals demand they sign onto the larger social safety net plan first.

For many progressives to get to “yes” on the infrastructure bill, they want Sinema and Manchin to sign off on at least an outline over the larger bill that they find acceptable. But it appears doubtful that can be reached by Thursday.

“I think what we need right now is a number from the Senate,” said Rep. Richard Neal, a Massachusetts Democrat who chairs the tax-writing Ways and Means Committee. “We did our part in markup. We have a plan. It’s been well met.”

How Sinema and Manchin negotiate

Aides and members point out that behind the scenes, Sinema is entrenched in the policy minutia, asking detailed questions to staff and members on everything from an expansion of Obamacare to tax policy. But, unlike Manchin who is more big picture, can be fuzzy on the precise details and is a known quantity because he has operated in Washington for years, Sinema is tougher for many members to read.

“They are totally different. Manchin is more predictable because he is more of an old-time politician,” one Democrat laid out on the condition of anonymity to privately discuss internal party dynamics.

For her part, Sinema has spent the better part of the summer asking questions rather than making any promises or staking out every position publicly, aides say. She rarely opines to large gaggles of reporters on what she perceives as potential pitfalls in legislation, repeating her mantra she doesn’t negotiate in the press.

Sinema’s style is to go directly to members or committee chairmen she needs to talk to, a habit that is reflected in the number of times she has met directly one-on-one with the President.

When pushed on criticism by fellow members that Sinema isn’t more forthcoming about her positions, Sinema’s team pointed CNN to the more than 10 formal meetings the Arizona senator has had with the White House. Those don’t include informal contacts, texts or other shorter exchanges that have become part of Sinema’s daily operation.

“I think what she does is she picks who she is going to engage with. She’s not going to engage with all 49 of us,” one Democratic colleague said in defense of Sinema’s style. “She sort of precise even in her thinking about who she talks to and about what.”

“I just like her, which is problematic because she is on the wrong side of some things,” the member joked.

Sinema has also been deeply engaged with the majority leader and his staff as well as key committees. Just last week, her team pointed to a meeting Sinema had directly with the staff on the Health, Education, Labor and Pensions committee.

Members who have negotiated with Sinema in the past also note that the Arizona Democrat is someone who stays true to what she promises.

“Her word is her bond. All that good stuff,” one Democrat said.

They also are quick to note she’s a task master. During the negotiations over the bipartisan infrastructure bill, Republicans say it was Sinema who would keep members moving through talks even as tempers would flare, reminding them that failure wasn’t an option and that wine was available if necessary.

Sinema’s style to play it close to the vest is one that has afforded her access to the major players, a direct line to leadership and to the White House. In recent weeks, she’s had nearly daily interactions with leadership and the White House, aides say. Her reputation for being hard to get to “yes,” but steadfast in her decision once she gets there has also earned her trust among many of her colleagues.

Yet even like-minded allies are uncertain where she — and Manchin — stand at a critical moment for the Biden agenda, causing anxiety in the ranks.

Sen. Angus King, an independent from Maine who also occupies the more centrist lane of the Democratic caucus, said, “I honestly don’t know,” when asked if he had an idea where the two stand.

“Yes,” King said when asked if he were concerned at the lack of clarity in their positions. “It concerns me because we are searching for a resolution on these important issues.” 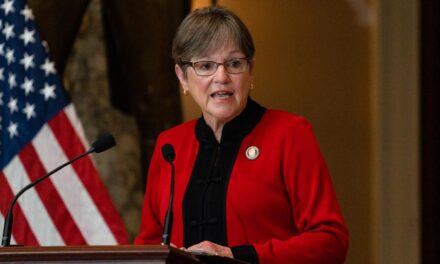 Kansas Democrats delivered a surprise win on abortion rights. November will show whether they can do it again 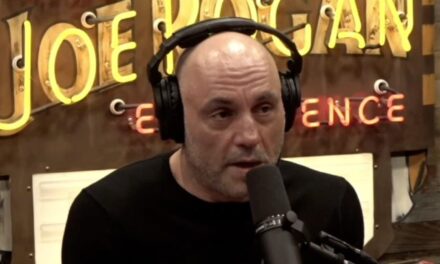