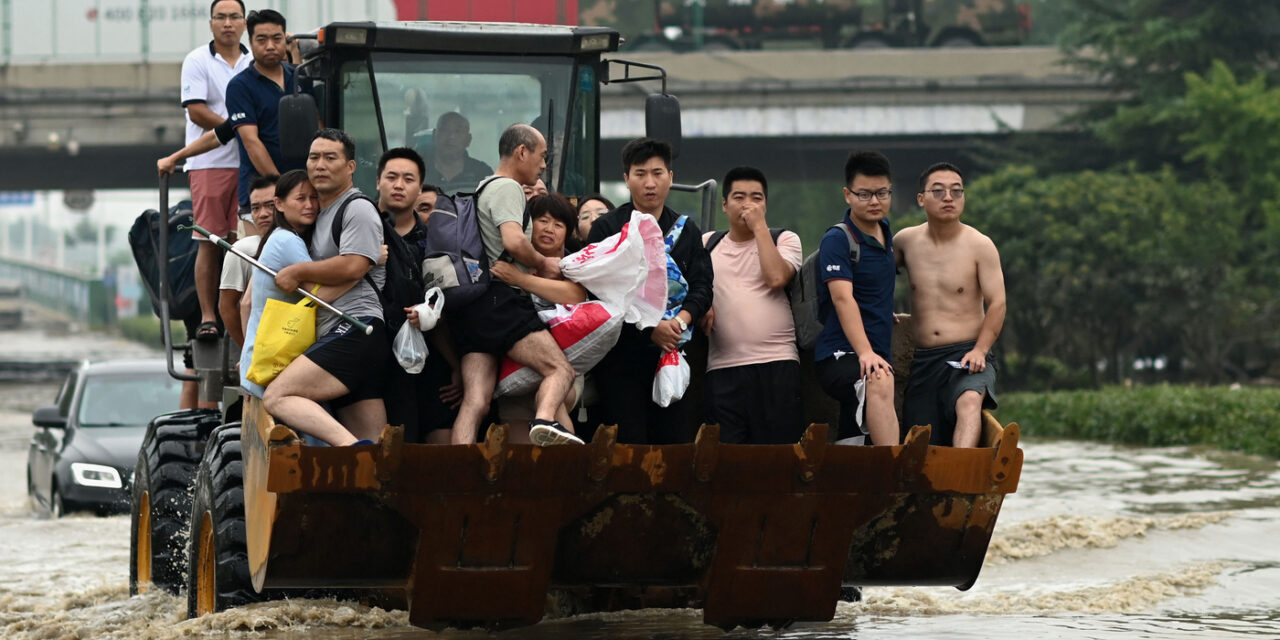 People ride in the front of a wheel loader to cross a flooded street following heavy rains which caused flooding and claimed the lives of at least 63 people in the city of Zhengzhou in China’s Henan province on July 23. Noel Celis/AFP via Getty Images hide caption

People ride in the front of a wheel loader to cross a flooded street following heavy rains which caused flooding and claimed the lives of at least 63 people in the city of Zhengzhou in China’s Henan province on July 23.

Inside her restaurant, Wang Ana barricaded the doors in an effort to stop water from seeping in. When that didn’t work, she grabbed her young son and a broom handle, using it to steady the two of them as they waded through the chin-high floodwaters back home.

“We could only hold on to each other,” said Wang, a resident of Zhengzhou, the capital city of central Henan province and home to approximately 12 million people.

Starting last Tuesday, storms dropped the equivalent of one year’s worth of water on the city in a 72 hour period before moving northward, flooding large swathes of Henan province in China. Authorities say the rains have displaced more than a million people and at least 63 people dead in what should have been – in theory – once-in-a-thousand-year floods.

Much like certain parts of Germany, the Netherlands and Belgium, Henan has been deluged by unusually slow-moving rain storms this past week, making painfully clear how climate change can exacerbate seasonal rains.

The extreme weather could also force city planners to adapt urban infrastructure which, once designed for convenience, become deadly underwater traps during the storms.

Only a few hundred feet north of Wang’s restaurant is the Jingguang traffic tunnel, built in low-lying, formerly swampy land. Water began rushing into the mile-long tunnel last Tuesday, creating a strong current against which Wang and her son fought to stay upright.

“Around 20 or so people – male, female, old, and young – were also trying to get home in the storm, so we linked arms, with the front pulling the back row forward, and the back pushing the front onwards,” said Wang. She made it home, a few hundred feet away, in just over an hour.

Those inside the tunnel were less lucky. Nearly 200 cars inside became stuck in several feet of water, then began floating. Several drivers behind them stayed in their cars, believing the pause to be traffic. At least two passengers never made it out.

“In that moment, I felt incredibly hopeless,” Wu Qiang, a driver who was briefly stuck in the tunnel, told Chinese media after his ordeal. He and two other passengers survived by climbing through their vehicles’ sunroofs, grabbing onto pipes fixed to the ceiling of the tunnel. “I could not help but shake when I got out of the water,” he said.

As of Sunday, rescue teams were still draining water from two of three sections of the tunnel. When NPR visited the tunnel three days after the flood, hundreds of police hovered around the site, shooing away curious onlookers while several mud-caked cars sat nearby, having been dredged from the waters.

Thirteen people also drowned in a rain-filled Zhengzhou subway route. Some passengers filmed desperate goodbye videos for loved ones while they stood in chest-high water.

“For the first time in my life, I touched a dead body,” said a 15-year-old survivor in a self-recorded video after the tragedy. Fellow riders gasped for air inside the sealed subway car as the hours wore on before rescuers arrived.

“For some reason, I was calm throughout the ordeal, because I refused to believe that this was my time to die,” she said.

As storms pounded Zhengzhou last Tuesday, Wu Chao watched the news with horror from his home in Xi’an, a city about 300 miles away.

Wu, a short, jovial businessman with a no-nonsense buzz cut, immediately sprang into action. He loaded his car with food, water and rescue gear, and by the next morning, he and dozens of other volunteer members of the private rescue organization, Dawn Emergency Rescue Team, were on their way to Zhengzhou.

To get to the city, rescuers had to overcome waterlogged roads and paralyzed infrastructure.

Some trains were stuck for days after tracks were flooded, and Zhengzhou briefly cancelled all flights into the region.

“The water was high in some places and low in others, making it impossible for machinery to reach trapped residents, so some members of my team jumped into the flood water without a second thought,” he said. “I am really moved by the resilience of the Chinese people in the face of disaster.”

Wu is part of an extensive relief and rescue mission deployed by both the Chinese military as well as private groups to inject much-needed food and water into submerged communities and bring flooded residents to temporary evacuation centers.

Over the weekend, rescue teams shifted their focus to northern Henan, where a tributary of the Yellow River had overflowed after a dam upstream was opened to release the floodwaters behind it.

“I have been doing rescue work for six years, but until arriving in Henan, I had never seen a flood as big as this one, that’s damaged so much and affected so many,” said Xiang Nanmin, the captain of another private team called Blue Skies that brought about 600 people to higher ground over the last three days

Scientists say rains like this haven’t fallen on Henan province in 60 years. But climate change might make such rains more common. And cities like Zhengzhou and Xinxiang might need to brace for more floods.

Even as the clouds cleared over Zhengzhou, to the north, in the nearby city of Xinxiang, many streets remained at hip-height water level, leaving elderly residents and children stranded in high-rise apartment buildings as they waited for the water to recede. Meteorological data indicated that the rainfall in Xinxiang is on par with the record-breaking storm in Zhengzhou.

To get around the city of nearly 6 million people, volunteers drove around tractors and bulldozers capable of plowing through the flood, scooping up residents who worked quickly to save their belongings.

One of those residents is Hu Songsong, who was maniacally energetic as she floats her remaining possessions inside a large red washbasin.

“Few people have been able to make it out of our block,” said Hu. “They cannot bear to leave their property behind. Those who have left can only carry their children out with them.”

She says her first-floor home was flooded as water crept in a few hours after midnight. She and neighbors began waking up the elderly residents in their compound. Dozens of them took shelter that dawn in a nearby hotel which was built on higher ground.

Much of the villages north of Xinxiang remained inaccessible as flood water flowed back into the city through the drainage system and the newly un-dammed river.

Throughout the weekend, Xinxiang volunteers waded around on foot, pushing inflatable rafts to deliver hot food to apartment complexes. One volunteer hauled an inflatable unicorn pool floaty around, offering rides in the flooded streets to older residents struggling to carry supplies back home.

He had bought the unicorn on a beach vacation five years ago, he said. He didn’t imagine he would be using it on the streets of his hometown. 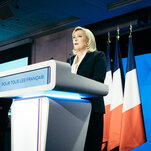 Man with giant kidneys will have major surgery to remove both 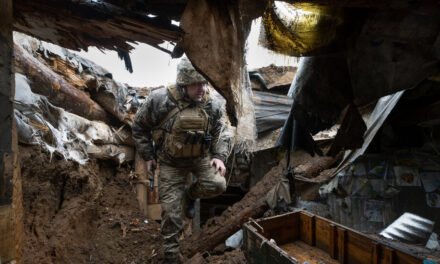