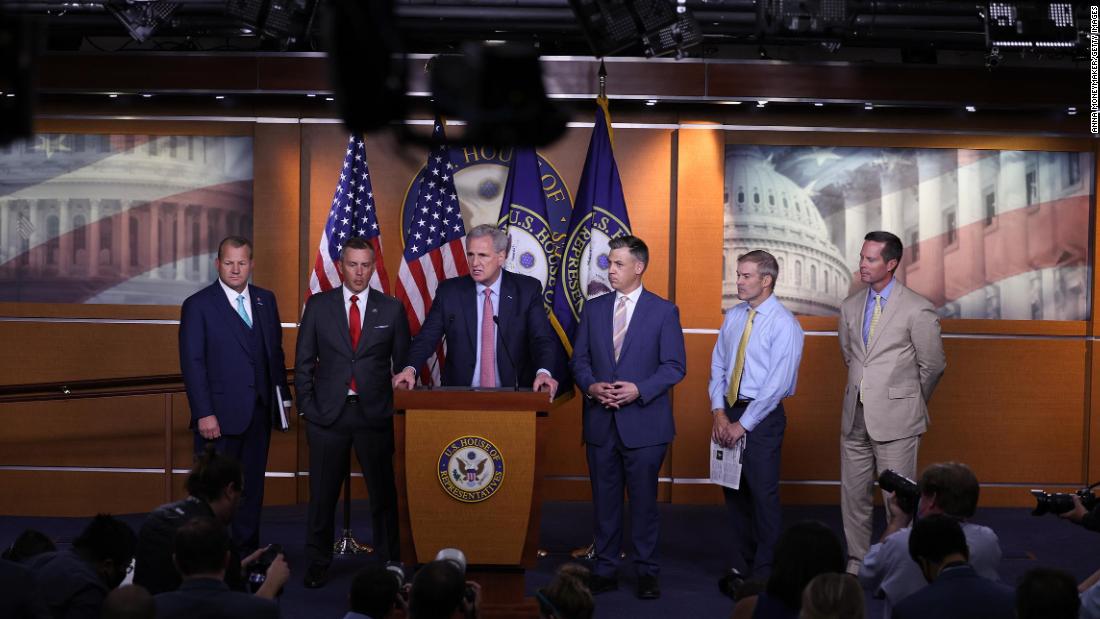 (CNN)It’s gone beyond whitewashing history. Ex-President Donald Trump and his House Republican enablers are now spinning fantastical inversions to hide his crimes against the Constitution on January 6.

Trump insisted that the mob that marched from his rally on that fateful day to invade the US Capitol were a “very loving crowd” in excerpts from audio interviews released on CNN by two Washington Post reporters in a new book on the ex-President’s last days in office.

The audio came out on the same day Trump’s mouthpiece on Capitol Hill, House Minority Leader Kevin McCarthy and other Republicans spoke out against authoritarianism and abuses of power — but they leveled those accusations at House Speaker Nancy Pelosi and not the twice-impeached former President.

It was the latest incarnation of a now classic tactic among pro-Trump Republicans and his media propagandists — an effort to not just excuse the former President’s conduct but to comprehensively alter the facts and public perception of the worst attack on Congress in two centuries. The shape shifting strategy isn’t just a political device — it allows those who promote it to avoid wrestling with the reality of an assault on American democracy.

Trump came across as rambling and wallowing in his own delusions in the tapes released by Carol Leonning and Phil Rucker of their interviews with him for their newly published book “I Alone Can Fix It.”

“They were ushered in by the police. The Capitol police were very friendly,” Trump told the reporters, referring to the sacking of Congress and assaults on police officers by his supporters.

The latest Washington controversy over the insurrection erupted when Pelosi ejected two of McCarthy’s picks for the select committee that will investigate Trump’s insurrection. McCarthy responded by announcing a complete boycott of the panel.

The furor played out hours before President Joe Biden took part in a CNN town hall in Ohio. Biden refused to back down from his vow to work with Republicans and to engage their voters — a position many in his own party believe is naïve. But he drew the line at the deliberate attempt by House Republicans to reinvent the history of the insurrection.

“I don’t care if you think I’m Satan reincarnate, the fact is you can’t look at that television and say, nothing happened on the 6th,” Biden said in Cincinnati.

“You can’t listen to people who say, ‘This is a peaceful march,'” Biden said.

The President’s remarks put the events of Wednesday in a wider context, as much of Washington obsessed over whether Pelosi had committed a tactical error that gave McCarthy an excuse to pull all his choices for the committee and to brand the entire exercise a partisan witch hunt and to ignore its findings. That theory has some merit from a narrow political perspective. The speaker effectively left her rival little option to preserve his own position inside her own party.

But the idea that Pelosi was outmaneuvered relies on the assumption that McCarthy has been acting in good faith in a long tussle about accountability for January 6, when he has repeatedly sought to prevent examinations of the ex-President’s conduct. And this is not a minor partisan political spat. America’s democratic traditions are on the line.

And the hysterical and hyperbolic reaction by GOP leaders to Pelosi’s move also emphasized how the House Republican Party will do anything in its quest to shield Trump from accountability and to prevent Americans — and ultimately history — from having a true understanding of what happened on January 6.

If anyone was guilty of authoritarianism, denying the truth and breaking American political institutions, it was the former President, who refused to accept the will of voters — the most fundamental principle of the US political system. The show of equivalence also shows how Republicans are using Trump’s months of lies and propaganda, which have convinced millions of his voters he was cheated out of power, to advance a self-contained — and false — narrative.

The GOP response to Pelosi also reflected McCarthy’s willingness to adopt any position seen as favorable to devotees of the ex-President who he hopes will show up on the campaign trail in midterm elections and make him speaker. And a news conference held by lawmakers who will now not sit on the committee underscored yet again how made for TV stunt politics pioneered by Trump have become the standard in the House GOP.

GOP blame Pelosi for the insurrection

McCarthy and fellow Trump devotee Rep. Jim Jordan of Ohio — one of the lawmakers blocked by the speaker — are seeking to blame Pelosi for the insurrection — rather than the ex-President who called a crowd to Washington and then goaded it with false claims that the election was rigged.

They implicitly argued that a mob waving Trump flags that smashed into the Capitol, beat up police officers and halted the certification of Biden’s election win while calling for then-Vice President Mike Pence to be hanged were not at fault. They said Pelosi was culpable for not providing sufficient security to keep lawmakers safe.

Their absurd gambit offered a preview of the circus of distraction that Jordan would have perpetrated had he stayed on the commission.

But most fundamentally, the Republican leadership charges that Pelosi is guilty of the very crimes against the Constitution and American democracy that Trump perpetrated showed how far the GOP has traveled from the spirit of its onetime hero, President Ronald Reagan, who once said that democracy was “the most deeply honorable form of government ever devised by man.”

Earlier, Pelosi dismissed two Republicans — Jordan and Rep. Jim Banks of Indiana — from the committee. She did not give specific reasons. But House Intelligence Committee Chairman Adam Schiff of California told reporters both men had been selected to be “disruptive and that’s not acceptable.”

McCarthy didn’t waste any time and accused Pelosi of presiding over a “sham” political process.

“It’s an egregious abuse of power. … Pelosi has broken this institution,” McCarthy said, in an overwrought news conference no doubt designed to impress Trump, who he visited last week to discuss midterm election strategy.

“I think it’s very clear to the American public this is a sham, but we will make sure we get to the real answers,” McCarthy said, promising his own probe of an insurrection that was the direct result of Trump’s lies about election fraud.

Pelosi, who is rarely above playing politics, should not be immune from criticism. She could have moved more quickly after January 6 to set up a bipartisan probe into the attack. Perhaps if she kept Jordan and Banks on the select committee, she could have preserved a modicum of bipartisan respect for its eventual findings.

Former Ohio Gov. John Kasich, who is now a CNN political commentator, said he would have preferred Pelosi keeping Jordan on the panel to make its eventual findings more credible — even if he caused disruption. Though he did add that the Republican lawmakers should be ashamed of rhetoric that “bordered on inflammatory.”

Republicans say that Pelosi abused her power by refusing to allow the minority to select its own members for an official congressional committee. But Democrats point out that they made repeated concessions to the GOP on the makeup of a bipartisan, independent, commission along the lines of the investigation into the September 11 attacks in 2001.

They had a deal, until Trump told McCarthy and Republican Senate Minority Leader Mitch McConnell to kill the idea of a commission with a Senate filibuster.

McCarthy was not the only Republican leader who made political calculations that require covering up Trump’s abuses of power. The most searing GOP statement came through the party’s No. 3 leader in the House, Rep. Elise Stefanik of New York, who was once seen as a moderate but whose fealty to Trump has rocketed her to GOP stardom.

“Nancy Pelosi is a radical authoritarian speaker of the House,” Stefanik said in a statement.

“This commission is an absolute sham and has been a disgrace from the beginning; no amount of drooling excuses from the mainstream media will change that,” Stefanik wrote, even adopting the Trumpian vernacular.

“She is afraid of the American people finding out the truth that her failed leadership and the gross mismanagement of the U.S. Capitol led to the tragic events that day,” Stefanik, said, transferring Trump’s guilt to the speaker.

Stefanik’s response underscored why she was able to replace the previous holder of her position, Wyoming Rep. Liz Cheney, whose truth-telling about January 6 and defense of basic democracy made her a pariah in the House GOP.

Cheney was named to the committee by Pelosi, despite her deeply conservative beliefs, and said that she backed the speaker’s decision to reject McCarthy’s selection of Banks and Jordan. She will now be the sole Republican on the panel.

“She accepted three others. She objected to two. One of whom may be a material witness to events that led to that day, that led to January 6. The other … disqualified himself by his comments in particular over the last 24 hours, demonstrating he is not taking this seriously,” Cheney said.

In recent days, Jordan has described the select committee as purely an excuse to target Trump. And Banks described it after he was picked by the GOP leader as a bid to “malign conservatives and to justify the Left’s authoritarian agenda.”

Cheney also broadened her breach with McCarthy, suggesting he was not fit to serve as speaker if Republicans win back the House.

Taxes: How the richest people on Earth avoid paying their fair share

Facebook Vows To Crack Down On Voter Intimidation In Election : NPR