A Brief History of ‘Friends’ Reunions


The long-awaited “Friends” reunion is almost upon us, set to land Thursday on HBO Max at around 3 a.m. Eastern.

But maybe we should really look at this as the latest “Friends” reunion. Because ever since the show’s end in 2004, there has been a steady series of onscreen regroupings among the primary cast: Jennifer Aniston, Courteney Cox, Lisa Kudrow, Matt LeBlanc, Matthew Perry and David Schwimmer. The Oprah Winfrey interview for the series finale was followed by sightings on red carpets and at all sorts of other events — concerts, guest-hosting gigs, game shows — as well as on social media, in P.S.A.s, during tributes, you name it. They interview each other; present awards to each other and others who worked on “Friends”; guest star on each other’s shows; and simply hang out — just generally not all six of them at the same time on camera. (According to the reunion special, the core six have all been together in the same room only once since “Friends” ended.)

Here are some highlights from when everyone’s favorite friends proved they were clearly not on a break.

The One With a Kiss Between Friends

The first time any of its co-stars acted together after “Friends” ended was in the first-season finale of Cox’s troubled FX drama “Dirt.” Aniston guest starred on the episode, which was hyped for its on-screen kiss between Cox and Aniston. (“Someone give Joey Tribbiani a front-row seat,” the NY Post exulted.) Back in the “Friends” days, Monica and Rachel kissed as a ploy to get their apartment back from Joey and Chandler, but it wasn’t shown onscreen. The smooch in “Dirt,” shared by the rival magazine editors and former lovers Lucy Spiller (Cox) and Tina Harrod (Aniston), happened on-camera, but it lacked heat. More interesting was Tina’s love-hate relationship with sleazy tabloid tactics, given Aniston’s newsstand ubiquity at the time.

The Ones Where Old Friends Come to Town

Cox’s lighthearted sitcom “Cougar Town” — which, despite its title, was mostly about friends hanging out — was a good vehicle for “Friends” reunions, offering interesting opportunities for role reversals. Kudrow plays the acerbic Dr. Amy Evans in a 2010 episode, a dermatologist who enjoys flaunting her superiority over everybody: patients, lovers, would-be friends. It’s almost as if Phoebe became Monica. Then, when Aniston appears in a separate episode from 2010, playing a kooky therapist named Glenn, it’s almost as if Rachel became Phoebe. Glenn is inclined to burn sage, invoke Buddha and say things like, “My anger is a purple balloon, and I let it go.” Jules (Cox’s character) ultimately decides to let Glenn go, calling her a “nut job.”

When Jules runs into Perry’s quirky Sam Johnston (quite literally, in a fender-bending traffic accident) in a 2014 episode, we get echoes of the Monica-Chandler romance: The two “Cougar Town” characters start dating and ultimately get engaged after he throws a circuslike parade for her. Never mind that Jules is already married to Grayson (Josh Hopkins), who finds himself compelled to propose again to his own wife. (“He’s proposing without jugglers?” Sam asks.) The best parts of the episode are some outtakes in the last minute, which reveal a genuine warmth between the two actors. (Bonus: He calls her “Monica.”)

Stream on Amazon Prime and Hulu.

The Ones Where They Seek Professional Help

Kudrow’s self-absorbed therapist character Fiona Wallice treated a number of former “Friends” on her series “Web Therapy.” These weren’t warm and fuzzy reunions, but they were fun to watch.

Cox plays a psychic named Serena Duvall, who’s having trouble with her visions. (As an in-joke, Duvall comments that she tried to develop a show called “Psychic Friends,” but was foiled by legal issues with the name.) Kudrow’s Phoebe might have believed in psychics, but Fiona is a skeptic, calling the notion an “assembly of nonsense.” The two women butt heads over which of them is more legitimate, and it leads to public humiliation.

Schwimmer’s character, Newill Miller, acts like an obsessed stalker, showing up uninvited at Fiona’s home. He wants her to do some sexual role-playing in which she would take the part of Al Pacino’s character in “Scent of a Woman,” for therapeutic reasons. (Just the thought of this makes Ross and Phoebe’s awkward fumbling seem romantic by comparison.)

Another of Fiona’s patients — LeBlanc’s flirty Nick Jericho — fears that he might have a gambling addiction. He wants Fiona to come online and watch him play poker, and offers her 1 percent of his winnings in trade. Fiona, however, would rather play on her own account, and clean Nick out. These sessions recall the old “Friends” poker games, but with higher stakes and better bluffing.

Finally, there’s Perry’s Tyler, a compulsive liar who says he feels an inexplicable connection with Fiona — but is he bluffing, too? As both Phoebe and Chandler know, pretending to desire someone can be a way of disarming them. Fiona misses all the warning signs until it’s too late.

The One Where Old Friends Meet Up at a Grave Site

Was the Cox/Perry reunion on “Cougar Town” not enough to keep the Monica/Chandler romance alive? Apparently not, since the two actors went another round on Perry’s short-lived NBC sitcom. This time each played someone trying to re-enter the dating scene after losing a spouse. Perry’s Ryan meets Cox’s Talia at the cemetery, where she likes to regale her late husband with “Suits” recaps. Ryan and Talia understand each other’s grief, but more than that, she tells him, they have chemistry: “We have a real connection between us, emotionally and otherwise.” Perhaps because they were married in a past TV life? We get a callback of a romantic line from their “Friends” relationship — “You’re the most beautiful woman in the room” — and other reminders of their well-known zest for zaniness. By now, though, it feels decidedly bittersweet.

The One With the Multiple Walks of Shame

Aniston co-hosted “The Ellen DeGeneres Show” in 2013, and a sketch with Perry turns into a P.S.A. about not showing up uninvited at someone’s home in the morning. “You should call first,” Perry keeps telling her. Then we see a familiar face trying to sneak out: It’s Cox, who apparently has been carrying on a relationship with Perry this whole time! Not just on TV! Cox pretends to be jealous of Aniston, while Portia de Rossi and DeGeneres try to slip out unnoticed, implying that something happened between all of them the night before. Really, friends, call first.

The One Where They Discuss Ross’s Lovemaking Skills

Jimmy Kimmel doesn’t just write “Friends” fan fiction; he also likes to reunite the actors to read it in an eerie replica of the original “Friends” apartment. This “Jimmy Kimmel Live!” sketch gets even weirder when Kimmel plays the part of Ross and compels his female co-stars to discuss Ross’s lovemaking skills. Kudrow’s Phoebe inherits Joey’s catchphrase, which raises the question: Where are Joey and Chandler? In Kimmel’s world, they died of monkey rabies after Marcel the monkey bit them. Despite the sketch’s obvious absurdity, thousands of fans thought Aniston’s pained expressions signaled real annoyance, forcing Kimmel to clear the air the following night. “She was acting,” he assured the audience, “apparently very well.”

The One Where They Swear Up a Storm

Doing a prime-time show on network TV meant the actors didn’t get to swear much. (Kudrow’s most famous burst of swears on “Friends” was silent, while other characters had to make do with ridiculous hand gestures.) But Aniston and Kudrow did get to demonstrate their foul-mouthed talents on “Jimmy Kimmel Live!” in a game of Celebrity Curse Off. Even with the bleeps, we generally know what they’re saying, and it’s even somewhat educational — the profanities are drawn from Greek, French, Yiddish and Kudrow’s teenage son’s vocabulary. There are also a lot of variations on terms for oral sex. Discover the curse that Kudrow used all the time on the “Friends” set, another one that merits an apology and the one that finally makes Aniston the winner by default.

LeBlanc, playing a fictionalized version of himself on “Episodes,” spent a previous installment of the series trying to get one of the other “Friends” to appear on his show. Unfortunately, as he discovered, none of them wanted anything to do with him anymore — the only one he could get was Gunther (James Michael Tyler).

After that setup, LeBlanc is thrilled when he runs into Schwimmer years later at a very unlikely place: a lavish party for the atrocious dictator of the fictional country of Karakastan. LeBlanc is making a paid appearance, as is Schwimmer, and the two bond over the outlandishness of the event (they’ve both received llamas as gifts) as well as its dangers (one of their drivers gets shot). The party puts their past grievances in perspective — whatever trivial offenses LeBlanc may have committed against his old friends, at least he’s not a mass murderer.

The Ones Where They Play Guessing Games

Both Cox and Kudrow went into the game-show business after “Friends” — Cox co-producing “Celebrity Name Game” and Kudrow co-producing “25 Words or Less.” Unfortunately, despite the presence of some rather inspired games within “Friends” — like Bamboozled, the wacky game that Joey practices with Ross and Chandler as contestants, or the famous trivia test — the real-world game shows lack pizazz. However, there is a certain sweetness to Cox and Kudrow trying to help each other remember “Friends” trivia in “Celebrity Name Game,” and Cox can do a pretty good David Schwimmer impersonation. (It might even tide you over until a trivia test rematch.) Cox and Kudrow teamed up yet again on “Celebrity Escape Room,” which is slightly more complicated and requires them to solve an oversized Rubik’s Cube and sing a Beastie Boys song together, even though Kudrow is unfamiliar with it. (Hey, it can’t be worse than “Smelly Cat,” right?)

The One Where Jason Bateman Joins the Friends

Who did you spend your lockdown time with? For the “Friends” stars, it was one another, at least according to a bit they did for Jimmy Kimmel when he hosted last year’s Emmy Awards. Checking in with Aniston, Kimmel pretends to be surprised to find Cox and Kudrow on the video call. “We’ve been roommates since 1994, Jimmy,” Aniston reminds him. OK. But then Jason Bateman wanders into the frame. “Bateman also lives in your house?” Kimmel asks. “Just until he goes off to college,” Aniston says, as if that explains anything. Can someone please clear this up during the reunion special? 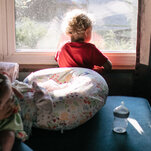 US election 2020: Bloomberg donates $100m for Biden in Florida