(Want to get this briefing by email? Here’s the sign-up.)

1. The Biden administration is under pressure to address the crush of young migrants arriving at the border. The flow is only expected to increase in coming weeks.

The numbers are daunting. More than 20,000 children and teenagers are in the custody of a government system that is already overstretched. In March, border agents encountered nearly 19,000 children at the border — the largest number recorded in a single month — most of them fleeing poverty and violence in Central America. Above, La Joya, Texas, last month.

By June, there could be more than 35,000 migrant children in need of care, according to government projections obtained by The Times — a prospect that one former senior official in the Department of Health and Human Services called “terrifying.”

The ability of the department to address the immigration surge — by building more shelters, moving children out of border jails and into new facilities quickly, and then reuniting them with relatives or sponsors in the U.S. — is the first major test of whether the Biden administration can respond swiftly and effectively to the crisis.

2. Michigan’s coronavirus outbreak is the worst in America, with more than 7,000 new cases daily.

But with residents weary of restrictions, Gov. Gretchen Whitmer, a Democrat, above this month, has avoided calling for another lockdown and is instead appealing to personal responsibility. Her position reflects the shifting politics of the pandemic, which is increasingly being shaped by growing public impatience and the hope offered by vaccines.

Just as the national vaccination campaign was finding its footing, supplies of Johnson & Johnson’s one-dose vaccine will plunge next week after problems at a plant in Baltimore. Officials in some states are worried.

We also took a closer look at how the virus tore through the country’s prison system, tracking every known case for a year. Inmates have been infected with the virus at rates three times as high as others in the U.S. More than 2,700 inmates have died.

3. Republican leaders and top donors are gathering in South Florida this weekend, and Donald Trump is the headliner.

The former president’s lingering presence on the political scene presents “a tremendous complication” for the party, one veteran fund-raiser said. Mr. Trump, pictured above in February, is considering running again in 2024, and though few of his allies believe he will follow through, he could have a chilling effect on other potential candidates.

Also elbowing his way to the front of the 2024 pack is Gov. Ron DeSantis of Florida, who has leveraged a brand of “competent Trumpism,” as one ally put it, and continues to hit back at critics of his handling of the pandemic.

4. A beloved fourth-grade teacher from California marched to the Capitol on Jan. 6. When she got home, a fight began.

Kristine Hostetter, her husband and their supporters became the focal point of months of divisive politics in San Clemente about the limits of free speech, as a growing number of left-leaning parents and students decided to confront the right-wing tilt of their neighbors and the racism they said was commonplace. It has not been a polite debate.

5. At least 300,000 more people died in Russia last year than were reported in official statistics. Above, a cemetery in the outskirts of Samara.

Russia’s official coronavirus death toll is 102,649, a number that supports President Vladimir Putin’s contention that the country has managed the virus better than most. But a Times analysis shows that deaths in Russia last year were 28 percent higher than normal — an increase in mortality greater than in the U.S. and most countries in Europe.

As global vaccination efforts proceed in fits and starts, one of our editors documented how her family navigated vaccine geopolitics across three continents. Like many families, they were confronted by misinformation, technological hurdles and personal doubts.

6. The death of Prince Philip, pictured above in 2017, opens up an uncertain chapter for the House of Windsor.

Prince Harry plans to return to Britain for Philip’s funeral on April 17, raising hopes that a deep rift in the royal family might heal. His wife, Meghan, who is pregnant, will remain at the couple’s California home.

The private funeral, to be held at St. George’s Chapel at Windsor Castle, comes a month after Harry accused his family of emotional abandonment in an interview. No question was more on the minds of royal watchers than whether Harry would make peace with his brother, Prince William, after a monthslong feud.

Philip, the Duke of Edinburgh, husband of Queen Elizabeth II and a staunch defender of the monarchy, died Friday. He was 99. Read his full obituary and have a look at his life in pictures.

7. Sightings of unidentified objects are up. But there’s no alien invasion.

Reports rose by about 1,000 nationwide last year to more than 7,200 sightings, according to the National U.F.O. Reporting Center. In New York, sightings nearly doubled in 2020 from the previous year, to about 300. The main reason: As more people stayed home and fled cities, they found more time to look up.

About a quarter of the reports nationally came in March and April of last year, when lockdowns were at their most strict. Virginia Stringfellow said she has had to turn people away from her locals-only U.F.O. meet-ups. She’s pictured at Bear Creek Harbor in Ontario, N.Y., one of the places where she said she was taken by alien beings.

8. The Masters Tournament heads into its final round today with Hideki Matsuyama of Japan on top of the leaderboard.

After a 78-minute rain delay, Matsuyama shot a sparkling 65 by playing his final eight holes in six strokes under par. At 11 under par for the tournament, Matsuyama, 29, will take an authoritative four-shot lead. Four golfers are tied for second: Justin Rose, Xander Schauffele, Marc Leishman and the Masters rookie Will Zalatoris.

Accurate putting is widely considered the most pivotal golf skill, and yet, every golfer at the Masters has a different way of doing it. Here’s what their grips look like. 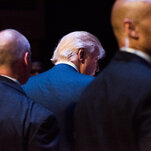 Opinion | America Could Use a Liberal Party 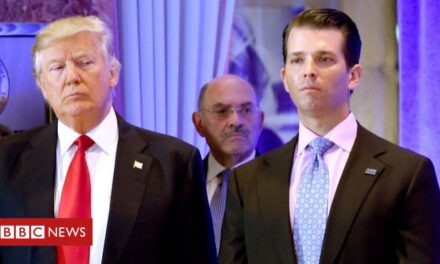 Trump Organization expected to be charged with tax crimes

US coronavirus: A year after the pandemic was declared, US Covid-19 numbers are way too high to relax just yet, CDC director warns