It was not a time in his life, understandably, that Rudy Gobert is eager to revisit. No one wants to be connected so closely to the day that the N.B.A., suddenly infiltrated by the coronavirus, suspended its season.

Gobert, though, is realistic. He constantly sizes up situations in his rim-protecting role for the Utah Jazz. He understands better than most that there are some things even a supreme shot-blocker can’t swat away.

So he has known for some time what was coming this month. Copious coverage of the unhappy anniversary was inevitable, ready or not, one year removed from Gobert’s positive test for the coronavirus on March 11, 2020. It was the thunderbolt that led to the postponement of Utah’s game in Oklahoma City that night and, some 90 minutes later, an abrupt announcement that the 2019-20 season was being placed on hiatus “until further notice.” The novel coronavirus had been thrust to the forefront of major team sports in North America.

It was the sort of unforgettably seismic event that forced Gobert, during a virtual interview session just hours before he played in Sunday’s 70th N.B.A. All-Star Game, to field multiple questions asking him to look back.

“Those few weeks, those few months, were really tough,” Gobert said softly. “I’m just blessed to be able to be here today to enjoy this All-Star Game — and to be healthy.”

The focus should be back on basketball soon enough and Gobert, this March, is clearly in a good place. Despite his modest 14.2 points per game, and winding up as the last of 24 players selected when LeBron James and Kevin Durant chose the All-Star squads, Gobert can stride into Utah’s one-year-later practice session on Thursday knowing he has never been a more effective two-way player.

There is a case to be made that Gobert, because of his impact at both ends, is the foremost catalyst for Utah’s league-best record (27-9) halfway through the regular season. Gobert, 28, ranks No. 239 out of nearly 500 players in usage rate; only 17.3 percent of Utah’s plays on offense involve him when he’s on the floor. But his tireless screen-setting, with the constant threat he poses to dive to the rim for dunks, opens things for Utah’s increased emphasis on the 3-point shot.

The Jazz are on pace to become the first team in league history to make 17 3-pointers per game. Ryan Smith, Utah’s rookie owner and a lifelong Jazz fan, called Gobert “one of the most selfless players in the league” for the space he creates.

It’s a scouting report no one could have filed 12 months ago, when Gobert lost any semblance of anonymity. Two days before he tested positive, Gobert made a show of touching several microphones on a press-room table. It was an ill-fated attempt to lighten the mood on the first day that reporters, limited by a new N.B.A. rule to promote social distancing, could not hold their microphones near Gobert’s face as they asked him questions. When the video was replayed, over and over, after Gobert’s positive test, his actions were widely interpreted as cavalier behavior that mocked the severity of the coronavirus.

In an Instagram post, Gobert apologized for what he termed “careless” actions and said he “had no idea I was even infected.” The N.B.A. was largely praised for reacting so swiftly to Gobert’s positive test — in what many billed as the moment, along with the subsequent suspension of the season, that the coronavirus threat became real for many Americans — but the fallout made Gobert a villain on top of his status as the N.B.A.’s Patient Zero.

What followed were those tough “weeks” and “months” that Gobert referenced before making his second consecutive All-Star appearance. Yet by year’s end, Gobert had rebounded so emphatically that he signed a five-year, $205 million contract in December, just days after Smith was approved as Utah’s new owner. It is the richest deal in league history for a center and ensured that Gobert’s 2020 produced a dizzying swirl of emotions.

“It was definitely a tough year, not just for me, but for everyone,” Gobert said. “A lot of things happened. A lot of unexpected things happened. But I believe that every tough moment is a learning experience. I think the most important thing is to try to make positive out of the negative, and hopefully that’s what I’ve been able to do.”

Said Smith: “It was hard for him to be the first, but if you ever dive deep into that day in Oklahoma, no one knew what to do. People were calling me when I was still a sponsor, saying: ‘How do we get the team out of here, how can we get a plane?’ The organization was literally in the most uncharted situation that we have been through.”

Gobert’s lows and challenges consumed several months. His bout with the coronavirus included a temporary loss of taste and smell. The microphones episode and a positive test for Donovan Mitchell, Utah’s All-Star guard, exacerbated long-simmering tensions between the two, which lingered until the season restarted at Walt Disney World in July.

Gobert, Mitchell and the franchise faced another setback when the Jazz were stunned by the Denver Nuggets in the first round of the playoffs after taking a three-games-to-one series lead. Some around the league wondered if Utah would break the duo up via trade. Yet Gobert insisted that just being in the N.B.A. bubble — and, for him, scoring the historic first basket of the restart — instilled him with “the feeling that the world was still spinning.” He and Mitchell have since rebuilt their relationship to the point it has become a running joke among Jazz players that various media reports described the union as “unsalvageable” last April.

“You watch those two guys play now and that’s a long time ago, literally and figuratively,” Utah Coach Quin Snyder said of past tensions.

To gain further distance from the crushing Denver series, Mitchell signed his own lucrative contract extension in November. The pair’s deals are worth a combined $400 million and Gobert, the No. 27 overall pick in 2013 who spent time in the N.B.A.’s developmental league as a rookie, has lived up to it with perhaps his best all-around play (13.1 rebounds and 2.7 blocks per game).

“Signing the contract doesn’t put more pressure on me,” Gobert said in a telephone interview on a recent drive home from practice. “In people’s minds, maybe it changed their perception about me, but no amount of money is going to add pressure to what I put on myself.

“I’ve had a target on my back for many, many years now — for multiple reasons. When you win multiple defensive player of the years, people just try to come at you. So I’ve had that mind-set already.”

Gobert, who stands 7 feet 1 inch and has a 7-foot-9 wingspan, also has a kindred spirit nearby when he needs counsel. Mark Eaton, the 7-4 center who played for the Jazz for his entire 11-season career, remains a fixture in the community and has become a sounding board for Utah’s modern-day defensive anchor.

They bonded a few years back when Eaton introduced Gobert to a fellow Frenchman, David Folch, who designs bicycles with 36-inch wheels for tall riders. Gobert purchased his own bike and soon visited Eaton’s Park City home for a 7-footers-only ride — and, later, a visit to what Eaton called “the shrine my wife put up in our house” of mementos from his Jazz career. Gobert spotted Eaton’s two Defensive Player of the Year trophies from 1984-85 and 1988-89 and announced that he intended to continue the tradition.

“Now he has two of his own,” Eaton said.

Praise was slow to come during Utah’s hot start, even when the Jazz ripped off a 20-1 stretch that featured 18 double-digit victories, but Gobert has learned to live with that, too. His succinct answer for skeptics who say that the Jazz have to prove themselves in the playoffs to validate their many regular-season feats: “They’re right.”

When given the chance, he also refused to fire back at the Hall of Fame center Shaquille O’Neal, who has been repeatedly dismissive of Mitchell and Gobert on TNT — especially regarding Gobert’s contract.

“I have a lot of respect for his career,” Gobert said of O’Neal. “He’s one of the guys that, growing up watching basketball, we all looked up to. But now he’s an entertainer in a way, so he’s doing things, saying things. If I start taking personal everything that’s been said about me, it’s going to be a long year.”

Gobert said he would take a similar approach to cope with the likelihood that his connection to March 11 is something that he’ll always be asked about.

“People only know what they’ve seen and what they’ve been told about me,” he said. “I’m not really worried about what people that don’t know me think about me.” 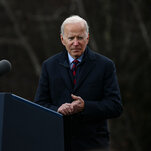