Bernie Sanders says the stimulus bill is a victory for progressives. Here’s why

Vermont Sen. Bernie Sanders, Mr. Progressive, wants to disabuse you of that notion. In an interview with CNN’s Anderson Cooper on Monday night, he was glowing about the new stimulus bill, not just for what it does to fund vaccines, schools and local government operations, but also for the larger progressive wins contained in it — despite the major loss of his $15 minimum wage proposal.

“Anderson, in my view, this is the most significant legislation for working people that has been passed in decades,” Sanders said, adding to Cooper that he’s still got plans to pass the wage hike that was stripped from the bill.

Democrats across the board seem to realize they have to sell this bill to Americans and make them trust that the government can help fix what ails the country, literally and figuratively.

That’s why Sanders’ praise of the bill is very much in line with what White House press secretary Jen Psaki said, describing it as “one of the most consequential and most progressive pieces of legislation in American history.”

The view from the flip side comes from Rep. Matt Gaetz, the Florida Republican, who similarly said on Fox Business News, “It is a Trojan horse for socialism, it is everything Democrats have wanted wrapped and branded in coronavirus so that people are scared into voting for it.”

It’s certainly true that the Covid bill, which will cost $1.9 trillion over ten years, vastly expands support for Americans in the middle-income groups — people who make a lot more than the poverty level but are well below the 1%. However, it’s more experiment than permanent policy shift.

Most of the key elements end after a year, although what’s generally true in Washington is that once the government passes something to benefit individual voters — tax cuts or new programs — it gets very hard to take them away.

Cooper asked Sanders to explain why the bill is so important. Here’s their exchange along with some contextual annotations below:

COOPER: I just want to go back to something you said at the beginning that you think this is the most significant piece of legislation in decades. Can you just talk more about why you think that is? And what does it say that, you know, the first relief in the beginning, this pandemic got overwhelming Republican support as well. This got no Republican support. What does that say to you?

SANDERS: Well, it says to me that the Republicans are have turned their back on the needs of working families. They used the reconciliation process a few years ago to give a trillion dollars in tax breaks for the top one percent and large corporations. They used the reconciliation process to try to repeal the Affordable Care Act and throw 30 million people off of their healthcare that they had.

SANDERS on relief checks: Now, that direct payment will be $1,400 for every working-class adult, individuals $75,000 or less, couples, $150,000 or less, plus your children. Family of four gets help of $5,600. And in the midst of this crisis, God only knows that millions and millions of families desperately need that boost.

Yes, we’re going to pay attention to the kids in America, many of whom are struggling for a variety of reasons. This legislation says that in the richest country in the history of the world, people should not be going hungry.

SANDERS on evictions: In my community, Burlington, Vermont, a few months ago, hundreds of cars lined up for emergency food packages taking place all over this country. This legislation provides help so that when the moratorium on evictions end, people will get assistance to stay in their homes, whether it’s a rental unit or your own home.

SANDERS on health care: This legislation more than doubles funding for community health centers. In my state, about 25 percent of people get their medical care. They’ve got their dental care. They’ve got low-cost prescription drugs, mental health counseling through community health centers. We have more than doubled funding it.

SANDERS on what’s next: So this legislation is quite comprehensive in attempting to address the needs of working families. And obviously, the next reconciliation bill will deal with our structural problems, not just the emergency problems of how we can create millions of good paying jobs, rebuilding our crumbling infrastructure, and transforming our energy system to protect us from climate change. 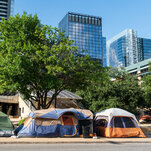 Stimulus checks are rolling out. Here’s what you need to know.