New stimulus check: Here’s how to know if you’ll get it

Roughly 90% of American households will be eligible, according to an estimate from the Penn Wharton Budget Model.

The payments are worth up to $1,400 per person, including dependents. So a couple with two children could receive up to $5,600. Unlike prior rounds, families will now receive the additional money for adult dependents over the age of 17.

Do you make too much money to be eligible?

On what year are the income limits based?

The income thresholds will be based on a taxpayer’s most recent return. If they’ve already filed a 2020 return by the time the payment is sent, the IRS will base eligibility on their 2020 adjusted gross income. If not, it will be based on the 2019 return.

When can you expect the money?

People could start seeing the payments hit their bank accounts within days of Biden signing the bill — which is expected to happen soon after the House votes on Wednesday on the $1.9 trillion Covid relief package.

For the previous pandemic stimulus bill, the IRS started sending out the second round of payments three days after then-President Donald Trump signed that legislation in late December. But it’s possible that tax filing season, which is underway, could slow down the process this time.

The payments do not all go out at once. Those whose bank information is on file with the IRS would likely get the money first, because it would be directly deposited into their accounts. Others may receive paper checks or prepaid debit cards in the mail.

You got the last stimulus check. Will you get this one?

Not necessarily. While the same people who received the full amounts in the previous two rounds of stimulus payments will likely get the full amount this time, the checks will phase out faster now — cutting off people at a lower income level.

The first round, which was worth up to $1,200, excluded individuals who earned at least $99,000, head of household filers with one child who earned more than $136,500 and married couples without children earning more than $198,000 — but families earning a little more were still eligible if they had children. About 160 million payments were delivered, with 94% of families receiving the money.

The second round, which was worth up to $600, also phased out a little faster because the full amount was smaller. It phased out entirely at $87,000 for single filers without children and $174,000 for those married filing jointly without children. Again, those earning a little more were still eligible if they had children. About 158 million payments went out, with 92% of families receiving them.

The payments have been based on a taxpayer’s most recent tax return. So those who have filed new returns since last March could fall into or out of eligibility if their incomes changed.

Who else isn’t eligible?

Will you owe back some money to the IRS if you earned more in 2020?

But if your income fell in 2020, filing your tax return now — before the payments go out — may mean you’ll get a bigger check.

What if you never got the last payment but believe you’re eligible?

Most people receive the payments automatically, but there are many who missed out — for a variety of reasons. An estimated 8 million eligible people didn’t get the first round of payments that were delivered last year.
Many of these people have very low incomes and are not normally required to file tax returns. Last year, the IRS set up an online portal where they could register for the money. It’s not yet clear whether the agency will open up the portal again for the third round of payments.

People who have moved or changed bank accounts since the last time they filed tax returns may have also missed out.

Those who were due money during the first two rounds of payments and did not receive it can claim it as a tax credit, known as the Recovery Rebate Credit, on their 2020 tax returns. 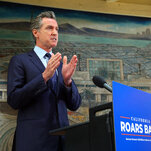 Are Californians Getting Another Stimulus Check?

She lost her job in the pandemic. She can’t even afford the dollar store to feed her kids