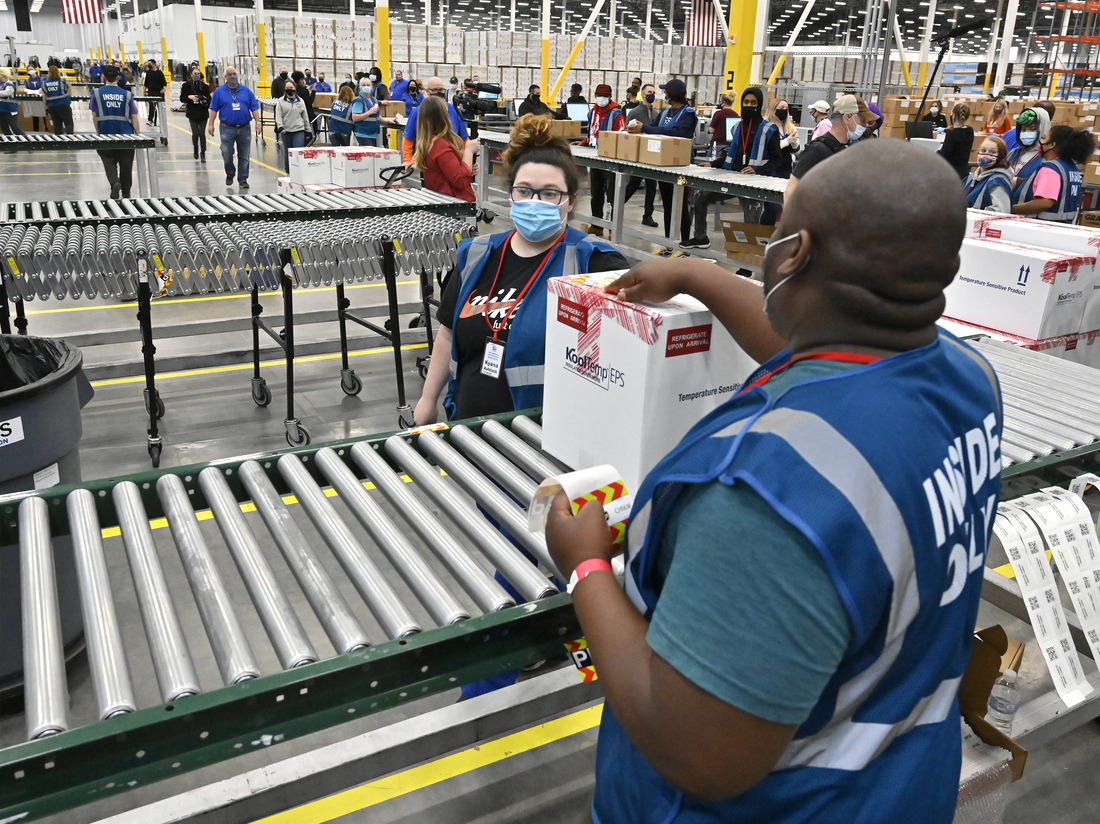 The first box of the Johnson & Johnson COVID vaccine departs from the McKesson facility in Shepherdsville, Kentucky on Monday. The company is set to distribute its first 3.9 million doses across the country this week. 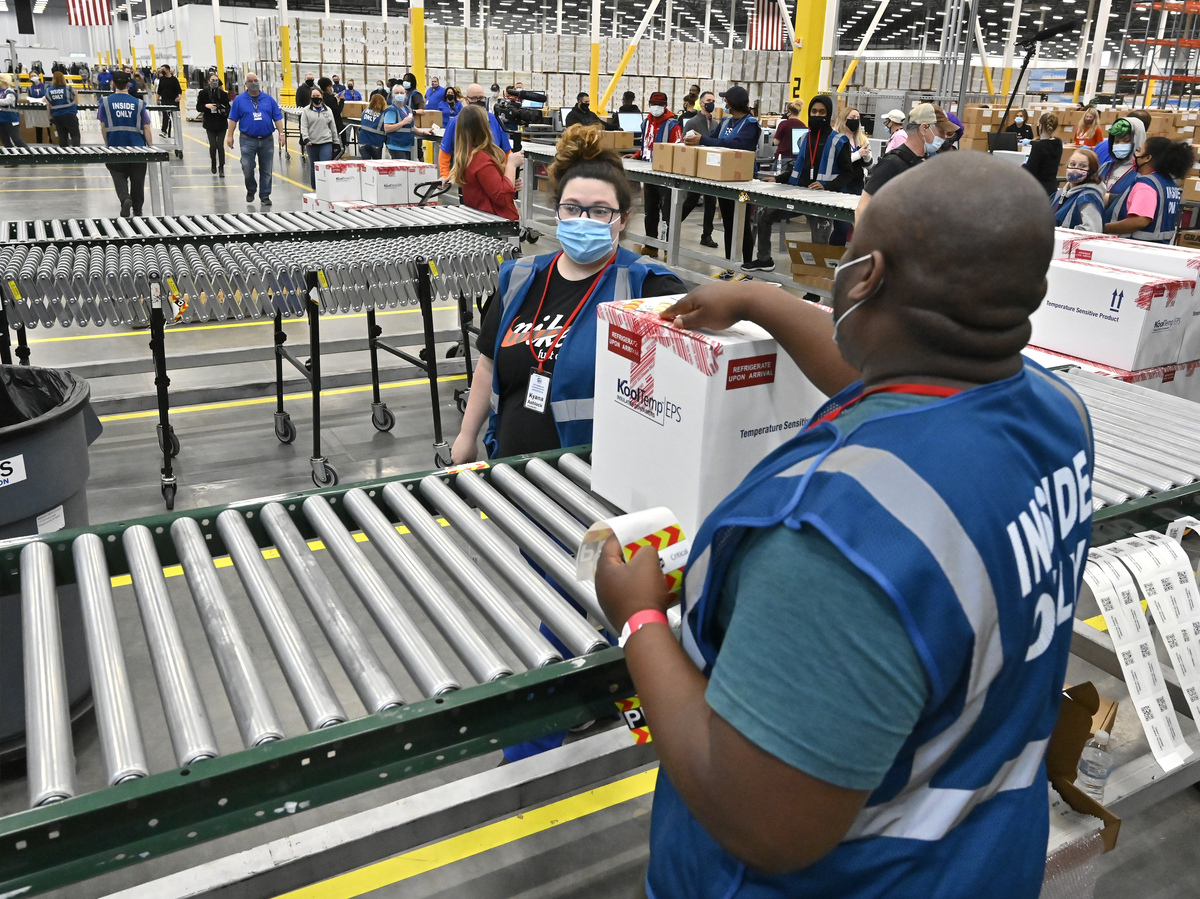 The first box of the Johnson & Johnson COVID vaccine departs from the McKesson facility in Shepherdsville, Kentucky on Monday. The company is set to distribute its first 3.9 million doses across the country this week.

Johnson & Johnson has begun shipping the first nearly four million doses of its newly-authorized COVID-19 vaccine across the country, officials said Monday, and is expected to further scale up supply in the coming weeks and months.

“We think literally within about the next 24 to 48 hours Americans should start receiving shots in arms,” Alex Gorsky, Johnson & Johnson’s chief executive officer and chairman of the board, told NBC’s TODAY.

Both the Food and Drug Administration and the Centers for Disease Control and Prevention signed off on the vaccine over the weekend, making it the third to receive authorization in the U.S. It’s also the first single-dose vaccine to receive the blessing of U.S. authorities and the only one that does not require ultra-cold storage.

Johnson & Johnson’s addition to the vaccine arsenal will be limited at first, but company officials expect to scale up production in the coming months. Gorsky said the company is committed to delivering 100 million doses by June and “up to a billion” by the end of 2021.

“When we say 100 million doses by June that means 100 million vaccinations, patients that will have been treated,” he said. “So we’re excited, we’re going to work hard to make sure that we follow through on all those commitments … we think it’s really important for our country and the world.”

Jeff Zients, the White House’s COVID-19 response coordinator, said at a briefing Monday that 3.9 million doses of the Johnson & Johnson vaccine will be distributed to states, tribes, territories, pharmacies and community health centers this week, starting as early as Tuesday.

“We’re getting these doses out the door right away to ensure vaccines get into arms as quickly as possible,” Zients said.

This number represents the entirety of Johnson & Johnson’s current inventory, and supply will be limited in the ensuing weeks. He said the company expects to deliver some 16 million additional doses by the end of March, “predominantly in the back half of the month.”

It is being allocated based on population, just as the Pfizer-BioNTech and Moderna vaccines are, he added. The federal government will continue to monitor distribution to ensure all three are offered in a “fair and equitable” way, he said.

Other public health officials at the briefing praised the vaccine as an addition to the country’s arsenal in the fight against COVID-19, and as one that offers increased flexibility.

Dr. Rochelle Walensky, director of the Centers for Disease Control and Prevention, outlined several advantages of the Johnson & Johnson vaccine. Namely, it can fully inoculate people who may not be able or willing to return for a second dose, and easier storage and transportation means it can be delivered to, and administered at, more community settings.

“Having multiple types of vaccine available, especially ones with different dosing regimens and different storing and handling, offers more flexibility,” she said.

Dr. Marcella Nunez-Smith, the head of the White House’s Covid-19 health equity task force, acknowledged that some people might prefer a certain vaccine, but urged them to be flexible.

“If people want to opt for one vaccine over another, they may have to wait,” she said. “Time is of the essence. Getting vaccinated saves lives.”

An international study found Johnson & Johnson’s vaccine to be 66% effective in preventing moderate to severe cases of COVID-19, in contrast to Pfizer and Moderna’s higher figures of 95% and 94%. But it also determined the vaccine prevented COVID-19 hospitalizations and deaths after 28 days, which officials say is equally important.

“All three vaccines are safe and highly effective at preventing what we care about most, and that’s very serious illness and death,” Nunez-Smith said.

Dr. Anthony Fauci, the president’s chief medical adviser, also noted that the vaccine is 72% effective against moderate to severe critical infection in the U.S., and 85% effective against severe COVID-19 globally. He pointed out that the clinical trial was conducted in the U.S., South America and South Africa, places with different infection dynamics and virus variants.

Gorsky offered a similar explanation on TODAY, assuring listeners they can trust they’re getting a safe and effective vaccine.

“When we conducted our clinical trials in October 2020 to about January of 2021, this was during the time when the incidence rate of the virus was really just about at its peak,” he said. “We also conducted our trial around the world, so 40% of our patients were in Latin America and about 15% were in South Africa, where over 90% of those patients were infected with the South African variant that we didn’t even really fully understand or appreciate earlier in the year.”

At the briefing, Walensky described the trials as the “largest scale clinical trials of any vaccine,” made possible by the high amount of disease circulating and the high volume of participant interest. All of the available data, she said, show that the vaccines are safe and highly effective.

“The most important thing you can do is to be ready to get the vaccine that is available to you,” she said. “It will help protect us all from COVID-19.”

Walensky also warned, for the second consecutive briefing, that progress against the pandemic number may be stalling. The number of new confirmed COVID-19 cases in the U.S. is leveling off at a concerningly high number, she said, following weeks of declining cases and deaths.

She cited data showing that cases reported to the CDC have increased by 2% a day to about 67,200, based on a 7-day average, with deaths also up by 2% to nearly 2,000 per day. Noting that these latest figures may look low compared to the winter peak, Walensky said they are still too high and implored Americans not to “be resigned.”

“Please hear me clearly,” Walensky said. “At this level of cases with variants spreading, we stand to completely lose the hard-earned ground we have gained.”

She said she is “really worried” about states rolling back public health measures, and urged Americans to continue following public health guidance in order to prevent a potential fourth surge brought on by more infectious variants. While vaccination is key to ultimately ending the pandemic, Walensky said, much of the population is still waiting.

Nearly 50 million people in the U.S. have received at least one dose of a COVID-19 vaccine, and the White House said the current 7-day average has returned to 1.7 million shots per day, following disruptive winter weather. 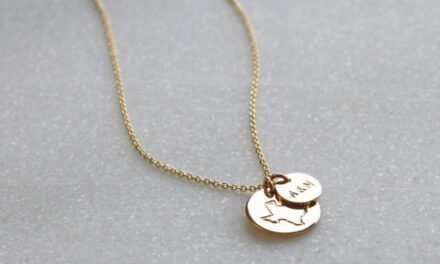 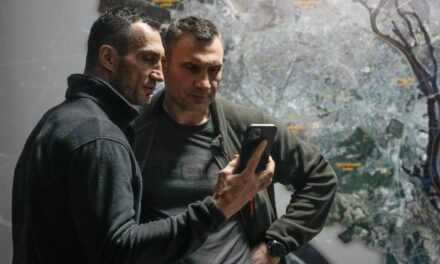 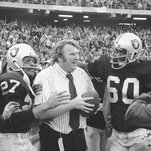 John Madden, Hall of Fame Coach and Broadcaster, Is Dead at 85 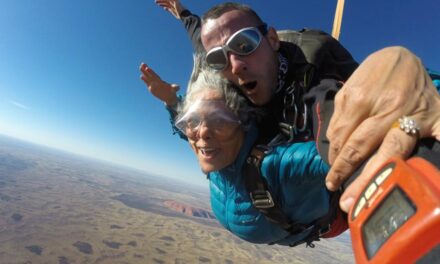