GameStop and Reddit news: Here are the 5 things you need to know

While we don’t know just how the so-called Reddit rebellion will change the future of investing, it’s safe to say Wall Street will never be the same.

1. IT’S A DAVID VS GOLIATH STORY

The Davids, in this case, are the mostly young day traders who congregate on the Reddit page WallStreetBets — aka the Reddit army, or the Reddit mob, depending on your point of view. “They have seen the rich get extremely rich by taking advantage of cheap money, and they want to get their piece as well,” said Richard Fisher, the former president of the Dallas Federal Reserve.
Their mission has two main goals: Drive up stock prices to score profits for themselves, and at the same time, force the establishment investors to abandon bearish bets against struggling companies such as GameStop (GME), AMC (AMC), Macy’s (M) and several others.

The Goliaths are mostly hedge funds who are shorting those stocks — in other words, big-shot investors placing bets that those shares will crash. They are also the Wall Street elite upon whom millions of investors rely to make smart decisions to boost their portfolios. But working in an industry associated with the house-of-cards system that created the 2008 financial crisis, these giants are not exactly beloved. Posts on the WallStreetBets subreddit openly relish watching short-sellers lose billions of dollars.

2. HOW THE GAMESTOP RALLY STARTED

The WallStreetBets community, which now boasts some 5 million followers, has been around since 2012. Describing itself as if “4chan found a Bloomberg terminal,” the forum’s giddy nihilism, inscrutable language and acerbic memes have fueled a war on a perceived corrupted mainstream.

The group noticed that GameStop, the struggling brick-and-mortar video game retailer, was heavily shorted by hedge funds. (The consensus on Wall Street seemed to be that GameStop would soon go the way of Blockbuster.)

Reddit investors took a different view from the short-sellers, however, and began buying up shares of the company that they believed were undervalued.

Although it had been building for a while, the rally really took off on Monday, January 11, when GameStop announced three new directors would join its board, including Chewy co-founder Ryan Cohen. Investors liked that Cohen brought digital experience to the table, something GameStop desperately needs, as video games go digital and malls continue their unrelenting slump into irrelevance.

GameStop’s stock rose a little less than 13% that day. But this wasn’t a normal, momentary stock surge. Two days later, it rose 57%. Then 27%…and so on. The Reddit crowd also drove huge jumps in AMC, BlackBerry, Macy’s and other stocks that were heavily shorted.

As of Friday, GameStop’s stock was up a jaw-dropping 1,587% since the beginning of January.

The surge ultimately had little or nothing to do with GameStop’s strength as a business. As investors following the Reddit group bought a ton of GameStop options, short-sellers were forced to buy shares to cover their losing bids — thus boosting the share price even further. This is what’s known as a short squeeze.

Millions of people, including Elon Musk, chimed in.
It quickly became “a populist uprising armed with no-fee brokerage accounts instead of pitchforks,” as CNN’s Christine Romans put it. And the only ones crying foul were the “sophisticated” Wall Street players.

“The irony is delicious,” Romans writes. “An online flash mob beats Wall Street insiders at their own game.”

On Tuesday, GameStop was the most traded stock on the planet. Then Robinhood crashed the party.

GameStop shares lost more than 44% of their value on Thursday after surging nearly 40% at one point earlier in the day.

The backlash was swift. Those who’d been minting money on their GameStop stock positions were, to put it mildly, furious. The consensus on social media seemed to be that Robinhood, which built its brand on “democratizing” investing, appeared to be caving to pressure from powerful institutions on Wall Street.

Robinhood relented Thursday night, saying it would resume “limited” buys on the stocks the next day. It also tapped $1 billion in cash from its private investors, signaling it was short on cash.

On Friday morning, the GameStop euphoria was back. The stock opened up roughly 100%.

There’s an argument to be made that GameStop was undervalued, but hardly anyone believes that GameStop, BlackBerry, Macy’s, AMC or any of the other companies that the Reddit crowd is promoting have the fundamentals to support such sky-high prices. At some point, reality will set in.

But that’s the problem with bubbles — get out too early, and you lose at a chance to cash out on top. So GameStop keeps surging … until it doesn’t.

“Someone is going to get hurt,” said Fisher, the former Dallas Fed president. “As happens with crowd behavior, you end up having people come in at the end at a very high price and getting burned.”

The Securities and Exchange Commission, the agency that regulates Wall Street, said it will “closely review” actions by trading platforms to restrict transactions.

FBI says Iran and Russia have US voter information 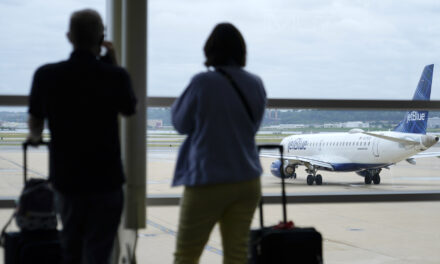 American, Alaska Airlines and JetBlue will require their employees to be vaccinated