2 words that explain why Donald Trump is losing

Bolling: “With Covid, is there anything that you think you could have done differently, if you had a mulligan or a do-over on one aspect of the way you handled it, what would it be?”

How about not making mask-wearing a political issue? Or letting the scientists lead our response to the pandemic? Or not playing down the threat of the virus when he knew how communicable it was as far back as February? Or fixing the testing process in America in the early days of the virus? Or showing any sort of empathy for the Americans who have lost their lives? (“It is what it is,” Trump said in September when confronted with the death toll from Covid-19.)
It’s not clear whether Trump’s “not much” answer is driven by pure tone-deafness or his obsession with always being right and never admitting a mistake. To that latter point, Trump was asked in July 2019 what his one “do-over” as president would be and responded: “It would be personnel. I would say if I had one do-over, it would be, I would not have appointed Jeff Sessions to be attorney general. That would be my one … that was the biggest mistake.”

The truth is it really doesn’t matter why Trump doesn’t get that he hasn’t handled the pandemic perfectly (or even close). It just matters that he finds himself on the wrong side of the majority of the country on that question.

In a Wall Street Journal/NBC poll released over the weekend, just 4 in 10 voters (41%) said they approved of the way Trump is handling Covid-19 while 57% disapproved. in CNN’s latest national poll, conducted earlier this month, just 37% approved of the job Trump was doing on Covid-19.
Poll after poll shows the same thing: A clear majority of voters disapprove of how Trump has handled the pandemic. And that disapproval is directly connected to his flagging poll numbers nationally and in swing states against former Vice President Joe Biden.

Seeing those numbers, a normal politician would have spent the last few months working to change voters’ perceptions about his handling of the issue.

They might acknowledge that this was an unprecedented challenge to the country and the world — and that, while their administration tried to always make the right decisions, some of their choices didn’t work out as they had hoped.

They might make a call to our better angels, arguing that the only way we can get through this virus is to put aside partisanship and recognize our common humanity. They might do any one of a number of things — all aimed at making clear to the public that they understands American’s doubts and worries and are going to do everything they can to prove they’re the right choice to lead the country out of this virus and into a brighter future.

Trump isn’t a normal politician. (Breaking news!) And he hasn’t done anything even close to what I suggested in the last paragraph. Instead, he has continued to insist that he saved millions — MILLIONS — of lives and without him things would have been much worse. And that we are “rounding the corner” on Covid-19 — despite all of the data to the contrary.
“People are tired of Covid,” Trump told campaign staff on a call earlier this week. “I have the biggest rallies I’ve ever had, and we have Covid. People are saying whatever. Just leave us alone. They’re tired of it. People are tired of hearing [Dr. Anthony] Fauci and all these idiots.”

What does this wild disconnect between how people feel about Trump’s handling of the virus and Trump’s own assessment of how he has done mean for his chances of winning?

In a Land Dominated by Ex-Rebels, Kosovo Women Find Power at the Ballot Box 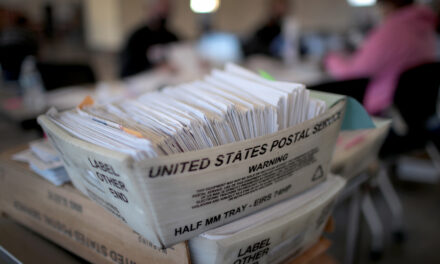