Are Michigan Democrats in Trouble in Their Senate Race?


One candidate slapped on a helmet, a black leather jacket and rode his Harley Davidson across Michigan. His ads highlight his toughness on China and his support for banning Chinese travelers from entering the United States early in the coronavirus outbreak, a policy of President Trump’s.

The other candidate calls himself “nonpartisan.” He denounces the way politics have become “nastier and more divisive.” His wife recently appeared in a campaign ad to talk about their young son who has asthma as a way to demonstrate her husband’s commitment to protecting health insurance for people with pre-existing conditions.

Neither candidate running for U.S. Senate in Michigan seems to want voters to know whether they are the Republican or the Democrat.

For Senator Gary Peters, the motorcycle guy and one of only two Democrats running for re-election in a state that Mr. Trump won in 2016, the path to victory becomes much easier if he can persuade enough of Mr. Trump’s supporters to vote for him.

For John James, the self-described nonpartisan Republican, success will come from the opposite situation: If enough people voting for former Vice President Joseph R. Biden Jr. cross over to support a Republican for the Senate.

The race — one of a handful that could tip the balance in the Senate — is among the most contested and expensive in the country. Polls show a tighter race than Democrats had anticipated, and both sides are fighting for the few remaining independent, undecided voters. In an election in which the parties have focused on getting their base to turn out, Michigan stands out as a place where winning the middle could make the difference.

Polls have varied but show Mr. James with an outside chance of helping Republicans flip a Democratic seat. A New York Times/Siena College survey found Mr. Peters up by one point, while others put his lead in the mid-to-high single digits.

Money has been pouring in. The outside political group leading efforts for Democrats, Senate Majority PAC, put $4.4 million into Michigan last week, federal filings show — bringing its total spending in the race to over $18 million. The only state where it spent more last week was Georgia. Republicans countered by adding another $5.6 million to the $9 million they had already pledged to spend in the final weeks.

It’s all been a bit disorienting for some voters.

Charles Gaba, a health policy analyst and Democrat from the Detroit suburb of Bloomfield Township, said that his friends who weren’t as politically tuned in were not sure which candidate was the Republican and which was the Democrat. Compounding the issue, Mr. Gaba said, is the fact that Mr. James is Black, which probably makes some people assume that he is a Democrat. Mr. Peters, a middle-aged white man, fits the stereotypical image of a Republican.

“Some people are confused,” Mr. Gaba, 50, said, which could contribute to the tightness in the polls.

Mr. James, a 39-year-old former Army helicopter pilot, has tried to steer his underdog campaign through one of the most difficult balancing acts of any Republican running for national office in this election. As a Black man on the same ticket as a president who makes overtly racist appeals to voters, Mr. James has been constrained and reticent in his criticisms, mindful that pushing back too hard could offend Mr. Trump’s intensely loyal base.

And as a candidate vying for the support of nonpartisans in a state that has trended away from Mr. Trump since he won there by 10,704 votes four years ago, Mr. James has strained to prove his independence. Democrats have attacked him for his refusal to put greater distance between himself and the president, highlighting comments like his insistence that he would “support the president’s agenda 2,000 percent.”

Mr. James’s campaign sees victory within reach if he can continue to tighten the race and Mr. Trump improves his standing — the latest data show Mr. Biden ahead in the state by high single digits.

Both parties are betting that despite the tribal nature of today’s politics, there are still people open to the idea of voting for a candidate from a different party in races down the ballot. That is what happened in 2016, when winning Republican Senate candidates carried battleground states by a few more percentage points than Mr. Trump on average. In bellwether Wisconsin, for instance, Mr. Trump won with 47 percent of the vote while Senator Ron Johnson received 50 percent.

“There is this thing in America called ticket splitters,” said Curt Anderson, a Republican consultant who is advising the James campaign. “That doesn’t mean it will happen, but it happens all the time. I’m not saying it’s not harder now or that the party bases aren’t more firm. But our data is pretty clear that there’s a path for John, and we’re on it.”

Not all Republicans are convinced. The Trump campaign’s internal polling does not show Mr. Peters at considerable risk. And the money that Republicans continue to invest in the race has led aides to senators in races that appear to be much closer to complain privately to party officials.

If Mr. James wins, it would be an embarrassing blow for Democrats in a state that they assumed would be a lock. Only one Republican, a candidate for the state’s Supreme Court, has won a statewide race since Mr. Trump’s narrow victory four years ago. Democrats flipped two House seats in 2018 and won the governor’s race after eight years of Republican control.

Mr. Peters, 61, has been involved in local, state and federal politics for three decades — from the Rochester Hills City Council to the State Senate to the U.S. House of Representatives and now the Senate. But he is not well known and has not faced voters since 2014.

“Folks are just getting nervous about the entire election right now,” he said. “We know what happened in 2016 in Michigan. Hillary was up in the polls about where Joe Biden is right now. And we know how that turned out.”

He’s seen as a workhorse who prefers to operate behind the scenes but not as a particularly dynamic campaigner. Unlike the senior senator from Michigan — Debbie Stabenow, a Democrat who parlayed a leadership role on the Agriculture Committee into bipartisan statewide support in her past three Senate races — Mr. Peters has been stuck in the Senate minority.

Ed Sarpolus, a Democratic political consultant and pollster, said that he’s been worried about the race for months.

“What he hasn’t done for the last six years is be visible and personable,” Mr. Sarpolus said. “What happened to his family in his ads? You’ve got to tell your story, but he’s not shown any of that this year. He looks like a professor, rather than an everyday Joe.”

The motorcycle trip this summer may have been an effort to shore up support with his base of organized labor, but it didn’t help Mr. Peters with progressives, an emerging wing of the party, Mr. Sarpolus said.

Mr. James’s competitiveness is the result of fastidious discipline with his message — which critics say has consisted of avoiding settings where he would face difficult questions and then providing nonanswers the few times he has been put on the spot. Voters have found his personal narrative to be compelling — a West Point graduate and combat veteran who runs a shipping business that is part of the company that his father started.

Big donors have loved it, as have individuals who give far less. Mr. James has raised more money than Mr. Peters has in every quarter so far this year except for in the most recent quarter when they effectively tied.

In today’s all-or-nothing political climate, a candidate who occupies the wobbly middle ground is taking major risks. For Republicans, there are usually just two paths: fealty to the president or outright defiance.

Mr. James has hardly declared his independence from Mr. Trump. His criticism of the president’s handling of the unrest over the killing of George Floyd was gentle. But his public appearances lately have spoken volumes. When Mr. Trump visited the mid-Michigan town of Freeland in September, Mr. James spoke to the thousands who came for the rally. But his speech came two hours before Mr. Trump arrived and by then, Mr. James was gone. Mr. James did not appear on Saturday at the president’s rally in Western Michigan.

According to recent polls, there are still large numbers of undecided voters and although they tend to lean Democratic, the pollster Richard Czuba says Mr. Peters hasn’t sealed the deal.

“One of the things we found, particularly with young Black voters under 40, there is still a sizable undecided chunk out there,” said Mr. Czuba, founder of the polling firm Glengariff Group, which in an early October poll found Mr. Peters with a five-point lead. “These are the people who Gary Peters needs to bring in and he hasn’t gotten there yet.”

The US just topped 6 million coronavirus cases in about 7 months. What happens next is up to you, Birx says 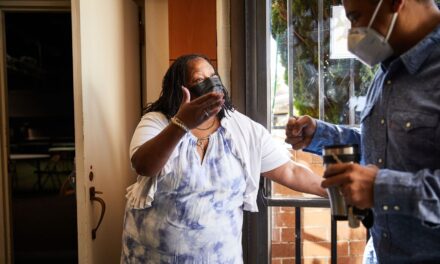 Portland Congregation Races To Get Members Vaccinated Before Oregon Reopens