How to election-proof your portfolio

It may be best to just ignore the election outcome and stick with your current investing strategy, they say: Don’t take money out of the market. And don’t try to predict which companies or sectors will be winners and losers from potential policy changes. Follow the economy.
Just look at what’s happened over the past four years. Shares of the Big Tech firms — the so-called FAANGs — have soared even though the companies are at odds with President Trump on trade policy and under scrutiny by antitrust regulators. The main reason? Sales and earnings continue to surge.

“Four years ago, if I had gone back and told you who would win, you’d probably want to position your portfolio for ‘America First’ US stocks,” said Brad Neuman, director of market strategy for Alger. “Using a political strategy didn’t work in the past four years and it’s unlikely that it will work for the next four years.”

Neuman noted that bank and energy stocks have been market laggards under Trump — even though they should be benefiting from some of the White House’s various deregulation efforts.

Meanwhile, he added, investments in tech and other innovative firms that spend a lot of money on research and development dramatically outperformed more domestic-oriented companies over the past four years.

“If you buy and hold, your gains should be higher over the long term,” Neuman said. “Don’t worry and sit things out. Just let the market work for you.”

Certainly there could be some significant swings in the market between now and the end of 2020 because of the election and coronavirus. Still, that shouldn’t make a big difference for investors with a diversified, long-term portfolio.

“The market is expecting above average volatility over the fourth quarter,” said Dave Jilek, chief investment strategist at Gateway Investment Advisors, an affiliate of Natixis. “But now is not the time to do anything heroic.”

Experts also point out that no matter who wins the election, there is a good chance that the winner would reappoint Federal Reserve chairman Jerome Powell to a second term. That might matter more to Wall Street than who is in the White House.

Powell has won praise from many on Wall Street for aggressively cutting interest rates to zero in the midst of the pandemic and launching several lending programs to help consumers and businesses.

A Powell-led Fed may not raise rates until 2024 or 2025, added Jim Caron, manager in global fixed income at Morgan Stanley Investment Management.

Caron said that because of the pandemic, the Fed is likely to worry less about inflation and more about making sure Americans get back to work.

“Yes, the Fed has a dual mandate. But the Fed is telling the market it really wants to get the economy back to full employment,” Caron said. “That is more important than price stability right now.”

More stimulus on the horizon

The market could also continue to rebound under Trump or Biden as long as Congress and the president eventually agree on another Covid-19 stimulus package.

“Neither party is talking about spending less,” said Brent Schutte, chief investment strategist at Northwestern Mutual Wealth Management Company. “That is different than past elections. There is no party pushing austerity now.”

More stimulus could help end the recession and get the economy growing again.

“The place in the business cycle where you take over is more important than a president’s policies or politics,” Schutte said. “No matter who takes over, we’re early in the cycle.”

That’s a key point: The average return for stocks early on in an economic cycle is about 14% annually on average compared to just 6.7% late in the cycle, Schutte said.

It may be difficult to avoid the political headlines. But investors shouldn’t let themselves become overwhelmed lest they make poor decisions.

“It’s impossible to ignore the noise because it’s just so loud,” TIAA Bank’s Gaffney said. “But it’s best to stick to your plan. Don’t try and trade the election. That’s a fool’s game.”

Stimulus negotiations: Trump signs off on a $1.8 trillion counter offer to Pelosi 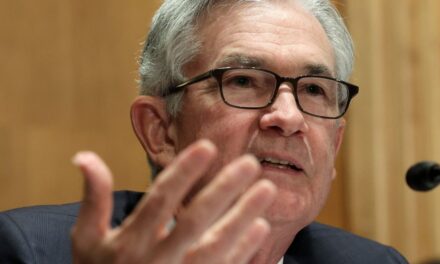 Powell Says Fed Could Start Scaling Back Stimulus This Year