Barry County Sheriff Dar Leaf said he knew nothing of the alleged crimes being planned. But his apparent friendly relationship with members of the armed group suggests there can be blind spots for local law enforcement.

After 13 men were charged in connection with the plot, Leaf said some of their actions could have been lawful.

Leaf said to WXMI: “So are they trying to arrest or was it a kidnap attempt?  Because you can still, in Michigan if it’s a felony, you can still make a felony arrest.”

He continued: “And (it) doesn’t say if you are in elected office that you are exempt from that arrest. So I have to look at it from that angle. And I am hoping that’s more like what it is.”

Leaf said the terror charges against twin brothers Michael and William Null, along with 11 others, had not been proven and they deserved the presumption of innocence. “In fact, these guys are innocent until proven guilty, so I am not even sure if they had any part in it,” he said.

William and Michael Null and five others face state charges of providing material support for terrorist acts and carrying or possessing a firearm during the commission of a felony. Six other men face federal charges.

The brothers, who are each accused of acting as lookouts while surveillance was done on Whitmer’s vacation home, are being detained. Bond has been set at $250,000. Neither has yet entered a plea and their probable cause hearings are set for October 14. CNN’s requests for comment made to their attorneys have met with no response.

An FBI agent testified Tuesday that members of the group had also named Virginia Gov. Ralph Northam as a potential target.

Leaf did not respond to multiple attempts to contact him. Barry County is located in southwest Michigan, between Grand Rapids, Lansing and Kalamazoo.

In his WXMI interview, besides saying Michigan’s criminal code allowed citizens to arrest officials, Leaf appeared to give credit to the men for being part of an armed group known as the Wolverine Watchmen.

“Well, you look at the militia itself and the originations of the militia,” Leaf told WXMI. “They have more of a legal standing in this country than the agencies that arrested them.”

“It is, frankly, disheartening that any law enforcement official with any time in service of his or her oath could respond that way,” said Matt Saxton, the group’s CEO. “His comments were dangerous, and let me be clear, there is nothing about this alleged plot that could be construed as legal, moral, or American.”

Militias and the law

Leaf’s comments point to the long and deep relationship between some sheriffs and self-styled militias, especially in Michigan.

Participants and state and federal officials often refer to these groups as “militias,” but they do not meet the standard of being a body of citizens enrolled for military service, called up periodically for drills, but serving full-time only in emergencies.

As such, Georgetown University’s  Institute for Constitutional Advocacy and Protection says these private groups are not allowed to act as legal militia in any state.

The Second Amendment talks of “a well-regulated militia” in its codification of the right to bear arms but the Supreme Court has ruled twice — in 1886 and 2008 — that that does not prevent bans of private paramilitary organizations.

The Michigan Constitution does forbid private military units operating outside state authority, providing that ‘the military shall in all cases and at all times be in strict subordination to the civil power.'”

Nevertheless, there is a history of coziness between these armed groups and county sheriffs, said a former member of the FBI, who spoke to CNN on the condition of anonymity.

“The sheriffs are the only ones they trust because they are duly elected,” said the former agent, who did investigations in Michigan.

“One of their biggest concerns is that the government is coming for their guns.”

Amy Cooter, who studies extremist groups as a sociology lecturer at Vanderbilt University, says the relationships endure partly because elected sheriffs need support from their constituencies.

“It’s been true all along, since the early 90s, that sheriffs in a lot of places in Michigan see themselves as having a cooperative relationship with militias,” she said. “They can call on them for searches for missing people, or during other times as more of a supplementary force.”

And if some sheriffs see value in the civilian groups the respect goes the other way too.

Norman Olson, who then called himself the commander of the Michigan Militia, told US senators on a judiciary subcommittee in 1995 that local sheriffs were the only authority he recognized.

“We will defer to the lawful historic authority which is the county sheriff. He indeed is the commander of the local militia and when a situation erupts in which we would be deputized,” Olson said at the hearing, called after the Oklahoma City bombing that killed 168 people.

Lawmakers were trying to get to the bottom of anti-government sentiment that led Timothy McVeigh and Terry Nichols to bomb the Alfred P. Murrah federal building.

In 1995, a relative of Nichols said he was a former member of the Michigan militia. And Cooter told CNN she was told by members of the group that McVeigh met with them.

Olson, referred to by the former FBI agent as the “godfather of Michigan militias” is no longer believed to be associated with extremist movements in Michigan.

Sheriff: These are serious charges

After backlash at his apparent defense of the Nulls including calls for his resignation, he did speak again with WXMI.

“The actions are horrible, but we cannot be trying this in the media or public opinion right now,” he said.  “Clarifying is what I’m doing here.  I don’t want anyone to think I’m sympathetic to these charges, all right? These are very serious charges.”

There’s a fear among federal law enforcement officials that the working relationships can blind local law officers to the potential risks of the vigilante forces, who generally have an extreme dislike, sometimes hatred, for state and federal government and their agents.

The FBI said it became involved in the activity that developed into the alleged Whitmer kidnap plot when members of an armed group were attempting to get the addresses of local law enforcement officers.

The criminal complaint said agents interviewed “a member of the militia group who was concerned about the group’s plans to target and kill police officers.”

Jonathan Greenblatt, CEO of the Anti-Defamation League that tracks and raises alarms about extremist activity, says contentious election cycles such as the one we are in can trigger outbursts.

“The potential for violent conflict associated with the election is quite high, both during voting and in the days and weeks and months after election day,” Greenblatt told CNN.

“A number of the possible scenarios suggest that a contested election or a narrow victory by either (presidential) candidate could lead both to a constitutional crisis and a political crisis, which extremist groups likely will try to exploit.”

In his earlier comments on William Null, Leaf told WXMI: “There’s a little bit of a relationship there. It’s not anybody I’ve ever had lunch with or anything like that.”

He said he met the Null brothers when the Black Lives Matter movement started.

“They started a ‘My Lives Matter’ and came into my office,” Leaf told WXMI.

While they have been named as members of the Wolverine Watchmen, Leaf understood they were part of a group they called “Michigan Liberty Militia.”

Leaf said he would run into the Nulls at political events. In May, as the FBI was building its undercover case, Leaf was on stage with William Null in a protest against pandemic shutdowns called the “America Patriot Rally – Sheriffs speak out.”

“Every now and then I’d run into those guys like at a rally, and they are always, always very nice, in fact, very excited about seeing their sheriff, Leaf told WXMI.

“They come out and shake their hands, shake my hand. And sometimes they’ll give me a one arm, big old bear hug.” 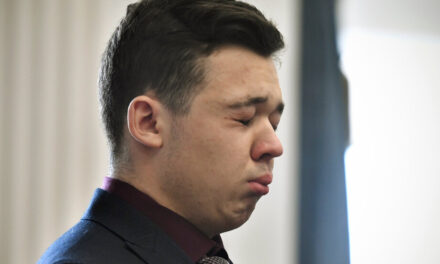 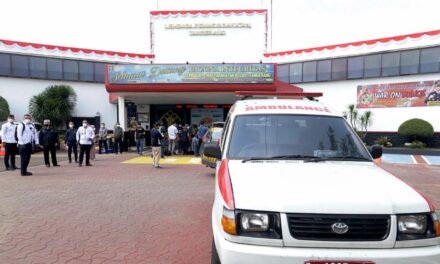 Fire at a prison in Indonesia kills at least 41 people

US election 2020: The great dividing line of this campaign