With uncertainty still clouding official bulletins of the President’s condition as he battles Covid-19, there is increasing bewilderment in Washington at some of his tone deaf and erratic moves since leaving the hospital on Monday. Trump suddenly blew up congressional negotiations on a Covid-19 economic rescue package. And in a fresh assault on public health strategies needed to quell a now-accelerating pandemic, Trump claimed falsely that it was no worse than the flu, as he portrays himself as a hero leader who conquered the virus.

By reinforcing his denial of a national emergency that has killed more than 210,000 Americans, Trump is adopting a high-risk strategy that potentially offends bereaved relatives of those who died from the disease and almost everyone else who has seen their lives, schooling and family life shattered. By squelching economic rescue talks, he leaves himself open to charges of indifference to the plight of millions of Americans thrown out of work during the pandemic and who relied on now expired federal unemployment benefits.

Democratic nominee Joe Biden seized on the sense that the Trump White House is running off the rails to pledge to restore national unity and to lead the nation out of the pandemic, following in Abraham Lincoln’s footsteps in warning America was again a “house divided” on the battlefield at Gettysburg, the scene of the Civil War’s bloodiest clash.

Trump’s latest attempts to downplay the virus — even as he is on a regimen of strong and experimental drugs to fight his own infection — are sure to be a centerpiece of Wednesday night’s debate between Vice President Mike Pence and the Democratic vice presidential nominee, Sen. Kamala Harris of California.

The President on Tuesday also made his most flagrant public attempt yet to force regulators to accelerate the approval of several Covid-19 vaccines that are currently being trialed in an effort to help his own reelection prospects. The move followed a CNN report that the President had been personally pressuring drug companies to deliver on a vaccine before Election Day.

“New FDA Rules make it more difficult for them to speed up vaccines for approval before Election Day. Just another political hit job!” Trump tweeted at US Food and Drug Administration Commissioner Dr. Stephen Hahn. FDA rules require several months to elapse after patients are administered the last dose of a prototype vaccine to ensure there are no serious side effects. The practice is designed to maximize public trust in a vaccine — the best hope of ending the pandemic — that polls show has already been dented by Trump’s politicization of the issue.

Trump’s own administration meanwhile is becoming a glaring symbol of his own irresponsible approach to the crisis. White House domestic policy adviser Stephen Miller is the latest top official to test positive, bringing the number of Covid cases among White House officials to at least 11. A fourth press aide to White House spokeswoman Kayleigh McEnany, who is at home with Covid-19, also has the virus. After blazing through the West Wing, Trump allies on Capitol Hill and in his campaign, the virus has reached the highest echelons of the US military.

Joint Chiefs of Staff Chairman Mark Milley, and several other senior members of the Pentagon’s leadership, are quarantining after the vice commandant of the US Coast Guard Adm. Charles Ray tested positive on Monday. Ray was at the White House on September 27 and later met other top military officers.

New Washington cases of Covid-19 came on a day when the fears of public health experts that a fall and winter spike in the disease is materializing came closer to being realized. By mid-evening, another 38,000 cases of coronavirus were recorded along with 603 deaths.

The administration descended further into open chaos on the eve of the debate in Utah between Harris and Pence. Incredibly, given that he is the head of the coronavirus task force and that he works in an administration riddled with Covid-19, Pence initially balked at the use of plexiglass screens at the debate that are now familiar at shops and offices to prevent the spread of the virus when social distancing is not possible. His campaign also mocked his opponent for taking advantage of the precaution. Screens protecting Harris, the moderator and the audience will graphically repudiate Trump’s argument that the pandemic is almost over and it is time to move on.

Uproar over Trump’s behavior, including his strange victory lap over his own case of Covid-19 when he tore off his mask and saluted his departing Marine helicopter on Monday night is making it impossible for the President to wrest the focus of an election now less than four weeks away from the pandemic.

And Biden told reporters Tuesday that if Trump is still infectious they should not meet in Miami next week. “If he still has Covid, we shouldn’t have a debate,” the former vice president said.

As Democrats seek to lock in their nominee’s advantage — Biden was up 16 points in a new CNN/SSRS national poll on Tuesday — former first lady Michelle Obama issued a closing argument on his behalf, calling Trump’s actions “morally wrong” and “racist.”

One day after the President returned from hospital, Trump’s official physician, Navy Cmdr. Dr. Sean Conley, issued another upbeat assessment of his condition, reporting that the President was doing “extremely well” and had reported no symptoms. Mystery however still surrounds Trump’s lung function after he appeared to be laboring after walking up the stairway to the balcony above the White House’s South Portico Monday.

There are also no clear answers still on how bad his condition got, with medical experts wondering why the President was offered an aggressive regime of experimental treatments reserved for only the sickest Covid-19 patients. The White House is also refusing to say when Trump last recorded a negative test before he got sick. That question is important because it would reveal whether the President went ahead with campaign travel and other events that would have put many people at risk in the knowledge that he was contagious.

There is no sign that Trump’s own bout with the disease has made him a more responsible steward of the nation’s well-being at a grave moment.

He returned to his previous and misleading position that the coronavirus was no more deadly than the flu. In fact, the pandemic has killed more Americans so far than succumbed to the season influenza over the last five years.

“Are we going to close down our Country?” Trump tweeted, referring to the flu. “No, we have learned to live with it, just like we are learning to live with Covid, in most populations far less lethal!!!”

In another eruption from the White House, Trump suddenly announced that he had halted talks between his team and Democrats on Capitol Hill on a long-delayed new stimulus and relief package.

“I have instructed my representatives to stop negotiating until after the election when, immediately after I win, we will pass a major Stimulus Bill that focuses on hardworking Americans and Small Business,” Trump tweeted.

The President maintains that Democrats are trying to load up the package with unnecessary aid for what he sees as wasteful blue states. He told Senate Majority Leader Mitch McConnell, a Kentucky Republican, to concentrate instead on confirming his Supreme Court pick, Judge Amy Coney Barrett.

The move appeared to be an attempt to blame Democrats for the failure to provide economic relief and to extend desperately needed unemployment benefits. But it was a puzzling gambit by a President who is falling further behind in the polls with the election fast approaching and who opened himself up to blame for halting the tortuous talks on the package.

House Speaker Nancy Pelosi was quick to exploit the opportunity, saying that the White House was “in complete disarray.”

“Today, once again, President Trump showed his true colors: putting himself first at the expense of the country, with the full complicity of the GOP Members of Congress,” Pelosi said. “Walking away from coronavirus talks demonstrates that President Trump is unwilling to crush the virus,” she added.

Trump’s decision meant another headache for vulnerable Republicans running for reelection as Democrats seek to take back the Senate.

One of their number, Sen. Susan Collins of Maine, who is locked in a tight race, called the President’s order a “huge mistake.”

And the President sparked fresh questions over whether he was fully up to speed on the situation when he tweeted “True!” while commentating on a CNBC report that Federal Reserve Chairman Jerome Powell had said that Congress must do more to support the economy.

Of course, Trump’s own intervention means that Congress will not come to the rescue. And he added to the confusion late Tuesday night by calling on Congress to pass a $25 billion package to support airline payrolls and a $35 billion Paycheck Protection Program for small businesses.

Stimulus checks: Here’s why your payment may still be pending

How to election-proof your portfolio 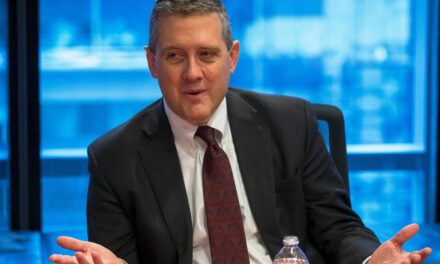 Fed’s Bullard: Time Is Right to Pull Back on Central Bank Stimulus