‘The Thing I Dread The Most Is Not Knowing’ : NPR 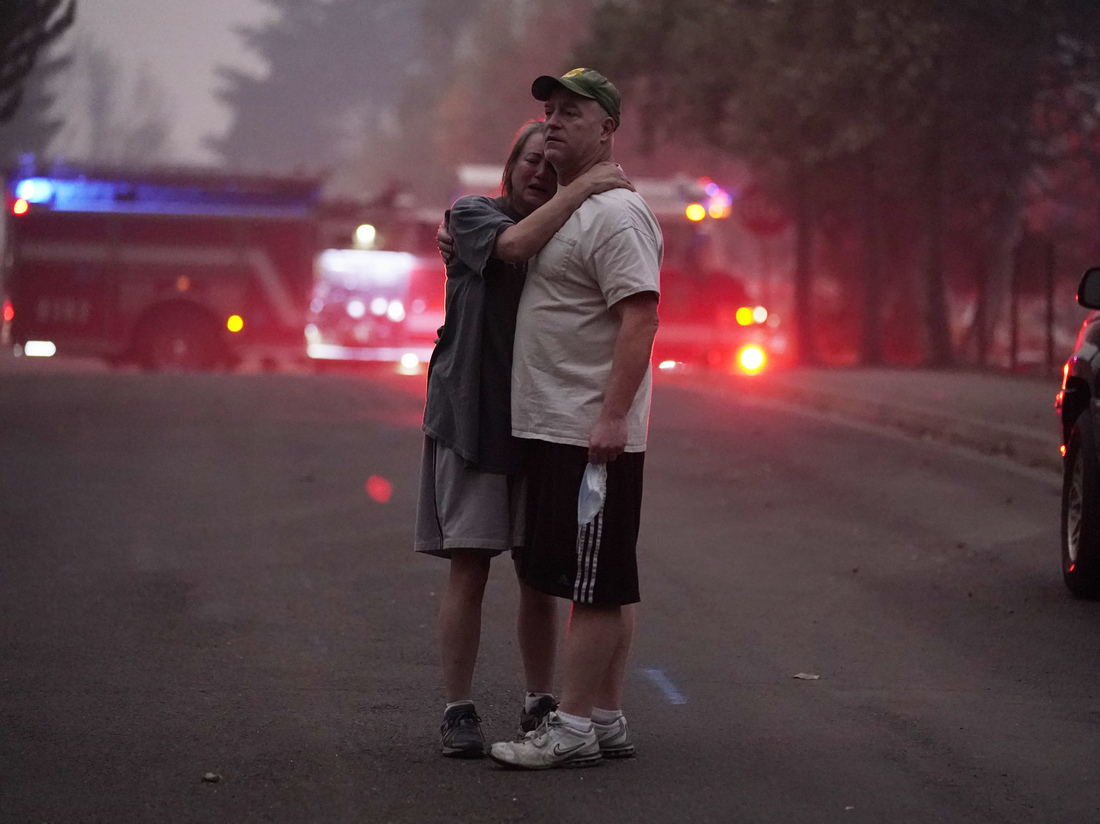 A couple embrace Thursday while touring an area devastated by the Almeda Fire in Phoenix, Ore. 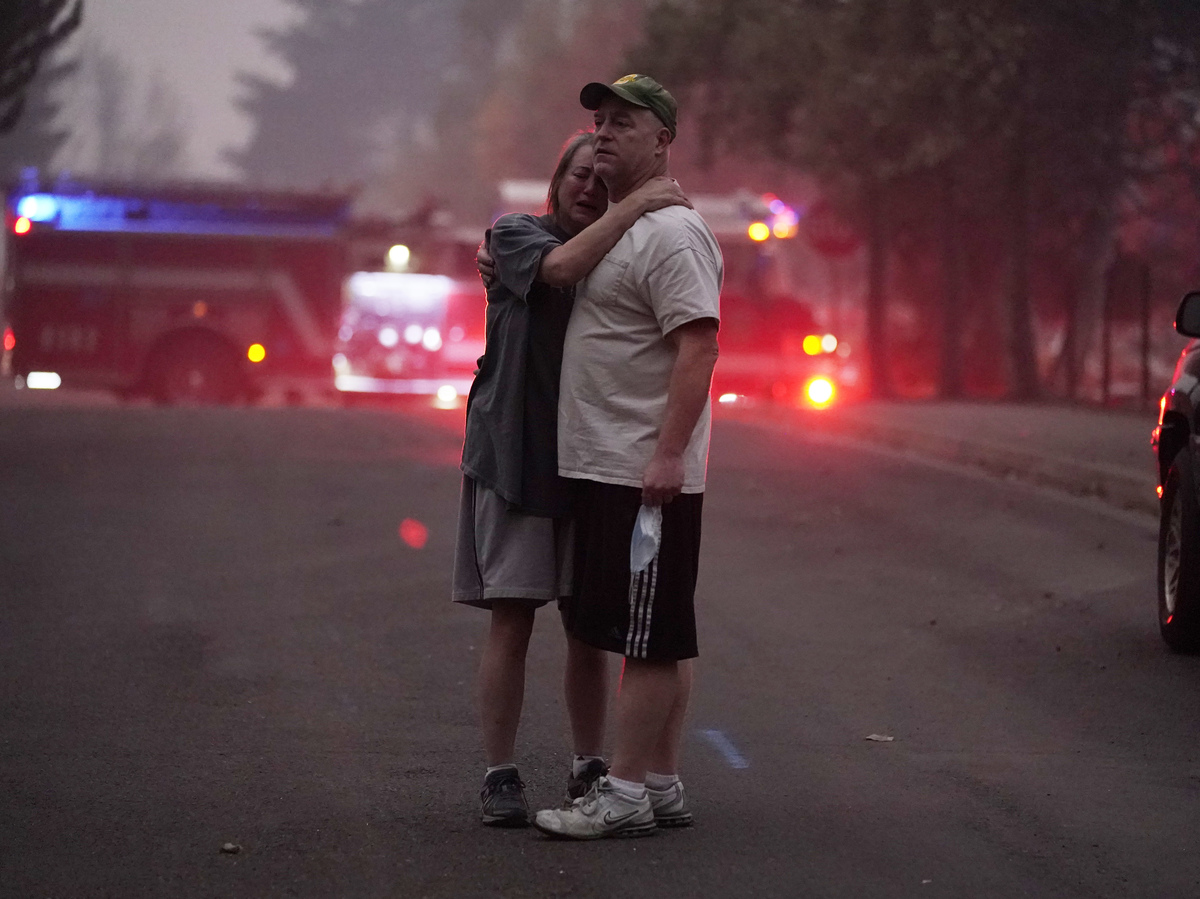 A couple embrace Thursday while touring an area devastated by the Almeda Fire in Phoenix, Ore.

At least 24 people have died as a result of fires consuming large swaths of the West Coast, with hundreds of thousands under evacuation orders to get to safety.

One hundred large fires are burning in 12 states across the West — but just five of them have been contained, according to the National Interagency Fire Center.

The unprecedented fire season has prompted federal fire officials to call in the U.S. military for help. Residents near 42 large fires are currently under evacuation orders to flee their homes.

Forecasters in the Pacific Northwest are hoping that dry winds have died down, and are optimistic that rain could help turn the tide next week. California also has reported that improved weather conditions have helped firefighters gain ground.

More than 40,000 Oregonians have evacuated and about 500,000 are in evacuation zones, Oregon’s governor said Friday. Firefighters are battling more than 3o fires there that have burned more than 850,000 acres.

The fires are most widespread in the northwest part of the state, and as Jonathan Levinson of NPR member station Oregon Public Broadcasting reported, they’re getting closer to the suburbs of Portland.

Some of the evacuees from Clackamas County, south of Portland, said they don’t know what they’re going back to or even if their homes are still standing, as Levinson reported. Nancy Price told him that she and her husband had to leave so quickly they didn’t have time even to pack medication.

“The thing that’s bothering me the most is, we don’t know what’s going on, how soon we can get back in to see, just to know if we have a home,” the 69-year-old from Molalla told Oregon Public Broadcasting. “We don’t know. The thing I dread the most is not knowing.”

Earlier this week, the Almeda Fire devastated communities in the towns of Phoenix and Talent in southern Oregon. Hundreds of homes and businesses are believed to be burned, Jefferson Public Radio reported.

Fire potential in Oregon and Washington is expected to tick down slowly over the next few days, reaching a “normal” to “very low” risk throughout the region by Tuesday.

“The dry east winds are over, and with that the worst fire weather conditions are done,” the National Weather Service in Portland said Friday. “Marine air [is] gradually working inland [the] next few days, pushing the worst of the smoke out.” The weather forecaster said the best news is there’s a chance of showers early next week.

Multnomah County, where Portland is located, hasn’t issued an evacuation order. But on Thursday, Portland Mayor Ted Wheeler issued an order closing parks to the public to prevent more fires from starting. He also called for evacuation sites to be readied in the area.

The Oregon Convention Center in Portland said it is preparing to host wildfire evacuees. 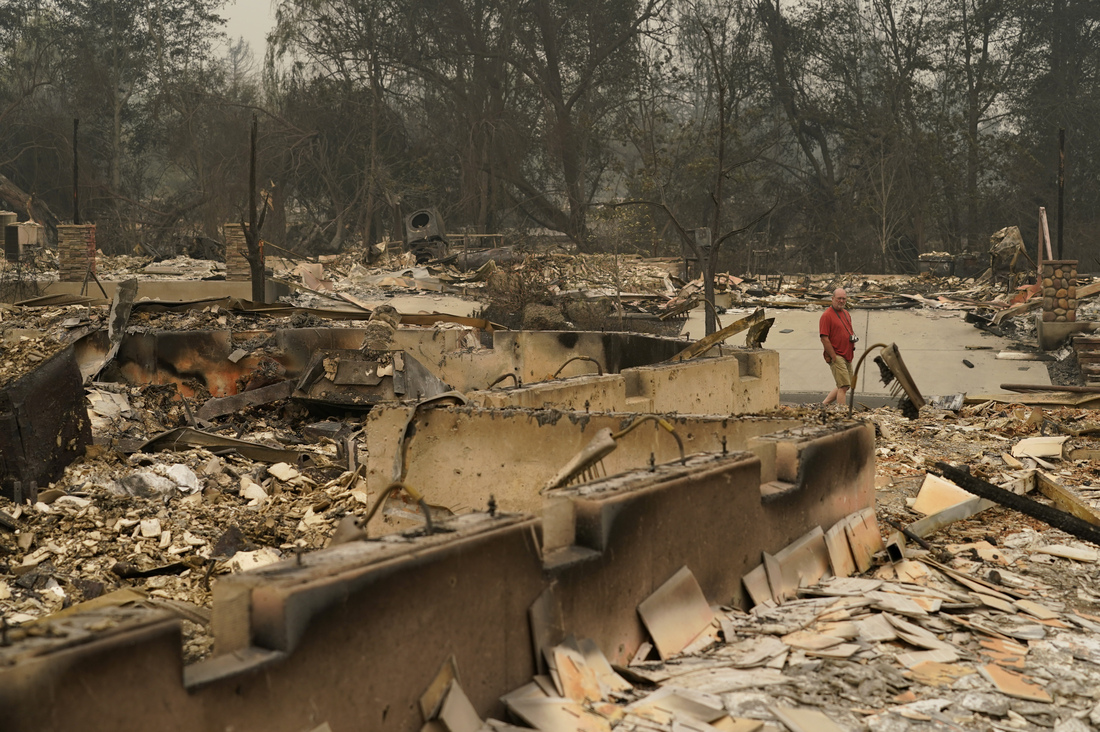 A man walks through a neighborhood destroyed by the Almeda Fire on Friday in Talent, Ore.

In California on Friday, nearly 15,000 firefighters were battling 28 major wildfires in the state. According to the California Department of Forestry and Fire Protection, or Cal Fire, five of the top 20 largest wildfires in the state’s history have happened in 2020. The amount that has burned so far this year is 26 times more than the same period last year – and would cover an area larger than Connecticut, fire officials said.

“As weather conditions improve, firefighters continue to gain ground on the many wildfires that began three weeks ago,” Cal Fire reported Friday.

California has reported 19 fatalities this fire season – including seven additional deaths confirmed Thursday in Butte County, north of Sacramento, from the Bear Fire.

That blaze has killed at least 10 people and forced more than 20,000 to flee after rapidly expanding earlier this week, according to Capital Public Radio. Twenty-six are still missing.

“The fire exploded to six times its previous size between Tuesday and Wednesday thanks to gusting winds,” Capital Public Radio reported. “Authorities say the fire is advancing more slowly Friday after the winds eased and smoke from the blaze shaded the area and lowered the temperature, allowing firefighters to make progress.” The North Complex, which includes the Bear Fire, is 23% contained as of Friday afternoon.

Despite progress in other areas of California, the August Complex in Tehama County became the largest fire in the state’s history on Thursday, at 746,607 acres. It was originally 37 separate fires caused by lightning in mid-August. Fire officials said “a large-scale wind event” on Tuesday and Wednesday caused the fire to push through the fire lines and expand.

The massive fire is just 25% contained.

Washington is also seeing large fires, concentrated inland in the state. Earlier this week, a fire consumed nearly every structure in the small town of Malden.

Satellite images show much of western Washington blanketed in a thick cloud of smoke.

As blazes rage in all of the West Coast states, Oregon Gov. Kate Brown said that people should expect more fire seasons such as this due to climate change.

“I wish the 2020 wildfires were an anomaly – but this will not be a one-time event. Unfortunately, it is a bellwether of the future,” Brown tweeted on Thursday. “We are seeing the devastating effects of climate change in Oregon, on the entire West Coast, and throughout the world.” 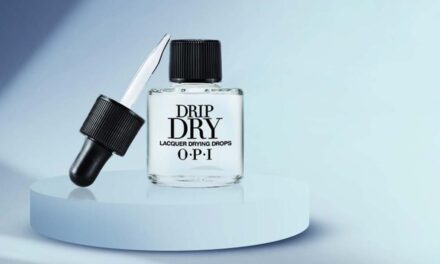 Opinion | When It Comes to Democracy, the U.S. Is Showing Its Age 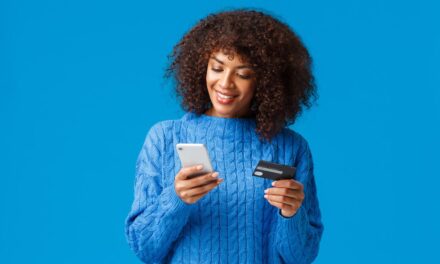